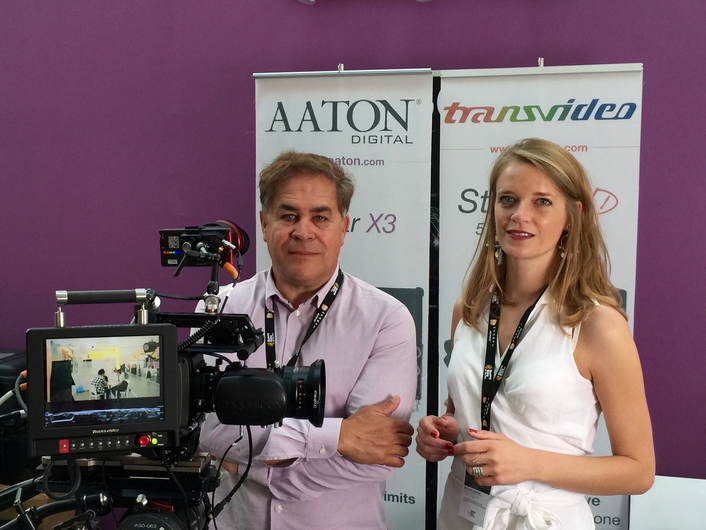 This year also sees Transvideo celebrate its 30 years in business, establishing itself globally with a strong line-up of on-board and field monitors and the expected on-location recorder CantarX3 from Aaton Digital is now being commercialized.

With an extensive experience of Direct & Indirect Sales as well as Strategic Marketing of professional cinema equipment at European level, Karine is ready to take up the challenge. " I am thrilled to represent such group of French brands that have established a proven track record over the years and taken a key position in the cinema industry."

Jacques says “Karine's passion for this business will be coupled to my dedication to this industry - Karine will help us to reach the growth that we are expecting for the next years by extending our market and service to different branches of our industries - she will be in charge of developing strategic partnerships with major manufacturers in the world”.

Their teams will attend the main exhibitions this year and will be looking forward to meeting you soon.

About the companies:
From 1985 onwards Transvideo has been creating products for the film industry and television production. It designed the first professional flat panel monitor in 1990, and since then it has led the high-end on-board monitoring market, including metadata extraction from intelligent lenses such as Cooke/i and ARRI LDS.

Transvideo is also active in avionics with several products used in Airbus aircraft such as the super air carrier A380 and A350, also in the single aisle A32X family.

An Academy Award in 2009 and a Cinec Award in 2010 have recognized Transvideo for its innovation and superior engineering ability.

In June 2013, TRANSVIDEO’s holding Ithaki acquired AATON, the French manufacturer of cinematic equipment. Since this time, AATON-Digital developed the Cantar-X3, the most advanced on location sound recorder that received a Cinec Award in 2014.