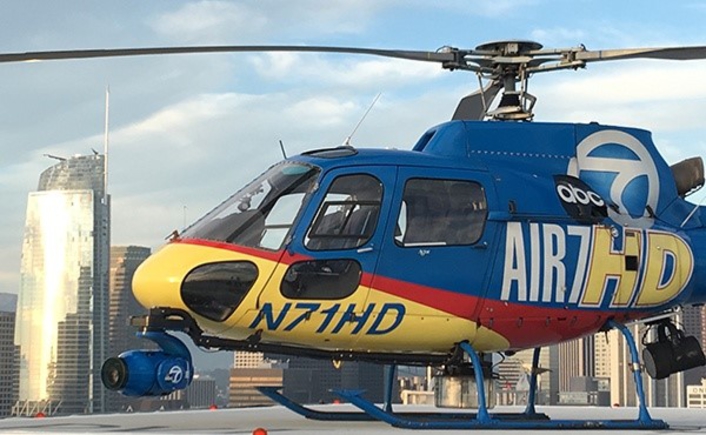 KABC-TV, the most watched television station in Southern California, is live with Air7 HD with XTREME Vision and SkyMap7 powered by the SHOTOVER F1 LIVE, a major breakthrough in aerial news coverage that delivers unprecedented clarity and detail from the Air 7 HD news helicopter.

“By utilizing the SHOTOVER F1 LIVE as the centerpiece of the Air 7 HD news helicopter, we are providing unparalleled viewpoints into breaking news events,” said Rob Elmore, KABC, Eyewitness News VP and News director. “XTREME Vision utilizes the industry’s most advanced zoom lens, is incredibly agile and is able to track vehicle speeds in real time – all tremendous advantages in helicopter videography. The experience is further enhanced by the advanced mapping overlays delivered with SkyMap7, which provides a critical frame of reference for viewers when visibililty is limited by such things as weather, smoke or mudslides. Our viewers will literally be able to see through these kinds of obstacles.”

“KABC-TV is one of the world’s top helicopter news operators and a valued resource for millions of viewers both in California and beyond,” said SHOTOVER CEO Brad Hurndell.  “We are honored to have been selected to support the station in its vital newsgathering efforts.”

Introduced earlier this year by SHOTOVER, a manufacturer of high-performance stabilization platforms, the SHOTOVER F1 LIVE is the broadcaster-optimized variant of the company’s popular SHOTOVER F1 gyro-stabilized camera platform. Featuring 6-axis gyro-stabilization with look down capability, the F1 LIVE utilizes an open platform design that can accommodate new cameras and lenses as they become available. The system supports all major broadcast cameras, including both 4K and 2K models and comes equipped with the SHOTOVER Rain Spinner, the industry’s top tool for keeping the lens clear when shooting in wet conditions.

About SHOTOVER
SHOTOVER is a developer of high-performance camera systems and UAVs for the motion picture and broadcast industries.  The company’s line of gyro-stabilized camera platforms offers aerial cinematographers an unprecedented level of stability, control and versatility in a compact package easily configured for 2D, 3D and Ultra HD shooting with the world’s most advanced cameras and lenses.  Developed in partnership with the motion picture industry’s top aerial cinematographers, SHOTOVER systems are fully user upgradeable, allowing operators to utilize new professional cameras, lenses, and accessories as they come to market.