K2 is the Perfect Tonic for Pentatonix 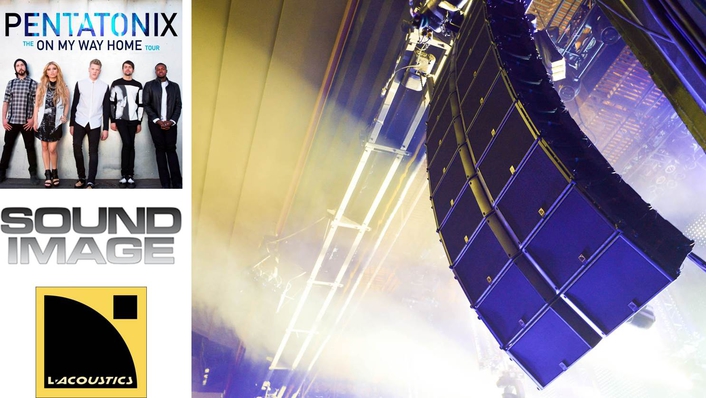 Sound Image carries L-Acoustics rig on Grammy-winner’s sold-out North American tour
Ever since the group’s 2011 victory on NBC’s The Sing-Off, Pentatonix has steadily been making a name for itself. Now, with a 2015 Grammy Award and nearly a billion cumulative YouTube channel video views, the five-piece a cappella troupe recently wrapped up a completely sold-out 21-date tour of North America as well.

Escondido, California-based Sound Image served as the sound reinforcement provider for the trek and supplied an L-Acoustics K2 system at the request of Chris Aman, who did double-duty as both the group’s FOH engineer and production manager.

Aman had his first opportunity to mix on K2 last year when Dispatch, the band he was touring with at the time, headlined the final night of Bridgeport, Connecticut’s Gathering of the Vibes music festival. “I had heard good things about K2, but when I actually got the chance to turn it on for myself, my reaction was, ‘wow… yes!’” he recalls. “With every other rig there have always been ‘normal’ adjustments that needed to be made, like compensating for waveguide turbulence or turning the horns down several dB. But I immediately noticed that K2 was much closer to what I was looking for, especially in the high frequency. I made one tiny little cut around 2.5k that day and, boom, it was there.” 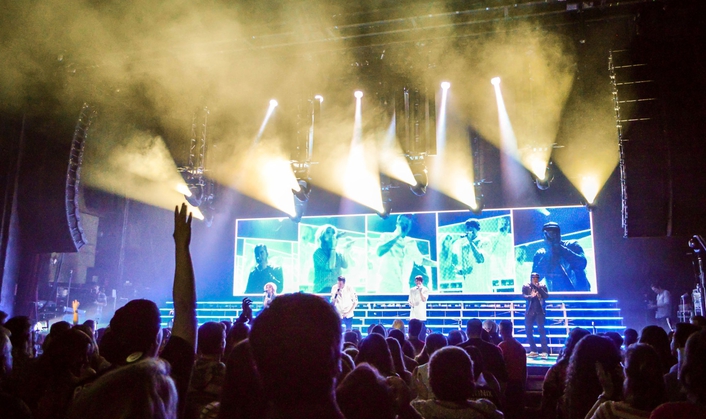 Going into this year’s “On My Way Home” tour of North American theaters and smaller arenas, Aman knew that K2 would be an ideal fit for Pentatonix. “Mike Adams at Sound Image and I had initially been discussing a variety of loudspeaker options for this tour, but after having a conversation with bass vocalist Avi Kaplan, I got a really good idea of what they were trying to achieve sonically,” he says. “So I called Mike back and told him that K2 was the right PA for this, especially given its definition in the midrange.”

The typical array setup deployed for this tour leg comprised 14 K2 per side flanked by outfills of nine Kara. Four more Kara were spread out across the deck for frontfill, with 12 SB28 subs delivering the low-end reinforcement. All loudspeakers were powered and processed by a total of six LA-RAKs each loaded with three LA8 amplified controllers.

Although Pentatonix’ live show exclusively features five vocalists with no additional accompaniment, aside from two songs where beat-boxer Kevin “K.O.” Olusola plays a cello, the group’s frequency range is surprisingly broad. “Avi hits a low A, which means he sings down to 55Hz, so I treat his vocal like a bass guitar,” the engineer notes. “One of the things I really like about K2 is that it goes down to 35Hz, so I basically do everything in the array then reinforce it a bit with the subs for a little air movement.” 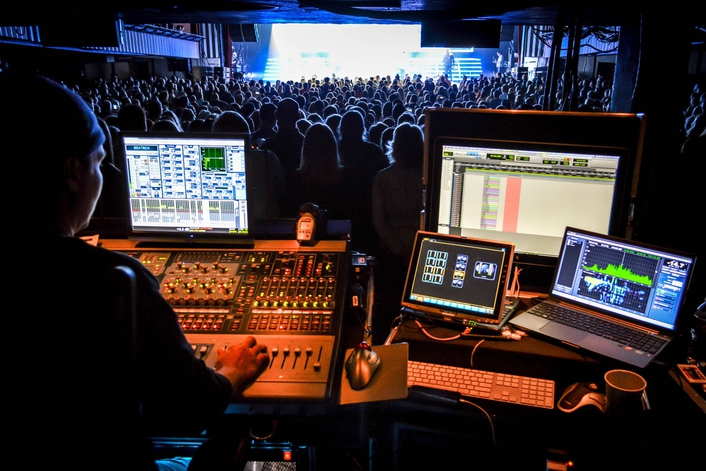 Aman further points out that the system’s intelligibility and “natural-ness” also means that he can keep the overall volume levels in check without sacrificing impact. “I mix the show at around 95dB,” he says. “Having a PA that is this defined and in-your-face means that I don’t have to mix it loud to get the definition this act requires. Everything’s right there at a very comfortable volume and both the band’s management and fans love it.”

With the North American and European legs now behind them, Pentatonix will now spend the summer opening for a top act before heading back out on the road once again this fall with Sound Image’s L-Acoustics K2 system.

Recognized throughout the industry for pioneering the modern line array, L-Acoustics offers a total system approach for both the touring and fixed installation markets, and a product line responding to the needs of venues from the most intimate club to the grandest arena. L-Acoustics sound systems can be heard in places like the Hollywood Bowl, the NBA Houston Rockets Toyota Center, or the Philharmonie de Paris. L-Acoustics solutions have been used at five of the world’s ten top-grossing festivals*, the London and Sochi Olympics, and on the Justin Timberlake 20/20 Experience World Tour, among others.