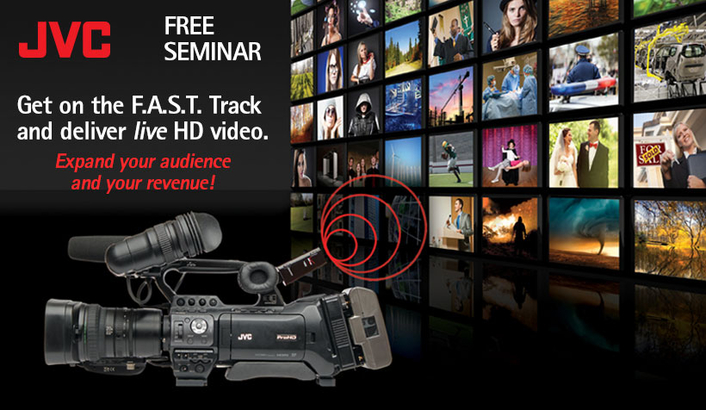 Multi-City Road Show has launched in Boston on 26 August
The “F.A.S.T. Track Tour,” JVC’s series of presentations promoting the live HD streaming capabilities built into its camcorders and related products, will make its next stops in the South Florida and Washington, D.C. markets. The seminar will be held at the Hilton Fort Lauderdale Marina in Fort Lauderdale on Sept. 23, followed by the Greenbelt Marriott in Greenbelt, Md., on Oct. 15. Both seminars are free, include lunch and run from 10 a.m. to 3 p.m.

Short for “Fluent Adaptive Streaming Technology,” F.A.S.T. represents streaming technology built into JVC’s GY-HM650, GY-HM850 and GY-HM890 cameras that includes content-aware error correction to ensure reliable HD transmission over a variety of Internet connections. During the presentation, JVC will showcase the cameras as well as its new BR-800 ProHD Broadcaster server and other products.The program also includes an introduction to streaming technology and workflows, including details on bandwidth, data rates, encoding and protocols. Industry consultant Jan Ozer, who writes for Streaming Media Magazine and Streaming Media Producer, will host the seminar, which will also feature guest speakers and interactive demonstrations.

The multi-city tour launched in Boston last month and received a very enthusiastic response from attendees, according to Dave Walton, assistant vice president, marketing communications. “The high point was our live interactive demo with a producer from WWSB in Sarasota,” he said. “They use the technology all the time for live shots. That’s when it all really came together for the audience, when they were able to see for themselves how effective our HD streaming technology can be for broadcasters, PEG channels and non-broadcast applications. ”