WDBJ7 reporter Alison Parker and photographer Sam Doyle demonstrate one of the station’s 16 new JVC GY-HM890 ProHD camcorders
When the University of Virginia Cavaliers advanced to the College World Series in June, CBS affiliate WDBJ7, which serves the Roanoke-Lynchburg, Va., market (DMA #66), covered the team’s games at TD Ameritrade Park in Omaha, Neb. For an assignment like this, the station would usually send one of its satellite trucks and an operator, along with a reporter. This time, however, the station only sent a reporter with one of the station’s 16 new JVC GY-HM890 ProHD shoulder-mount camcorders.

According to Alan Novitsky, WDBJ7 director of engineering and IT, the setup provided “flawless live shots that looked absolutely fantastic.” It also eliminated a roughly 2,300-mile round trip for the station’s satellite truck, which provided significant operational cost savings.

In the field, the GY-HM890 is paired with a Verizon 4G LTE modem that connects directly to the camera via USB. At the station, JVC’s new BR-800 ProHD Broadcaster server manages the HD streams from the cameras and routes them through four Teradek decoders for live reports. Novitsky said each camera’s embedded Zixi advanced error correction, combined with the ProHD Broadcaster, has created such a highly reliable single modem streaming system that WDBJ7 will purchase more decoders and expand its live ENG capabilities next year.

WDBJ7 debuted the new camcorders on the air in late May. One of its first live shots was coverage of steeple repairs at St. Andrew’s Church in downtown Roanoke from a helicopter. Since then, one of the JVC cameras provided exclusive live coverage of a tanker truck crash in June, and another delivered live shots from a Ferris wheel at the Salem Fair in early July. WDBJ7 is one of nine television stations in six states owned by Mishawaka, Ind.-based Schurz Communications, Inc. 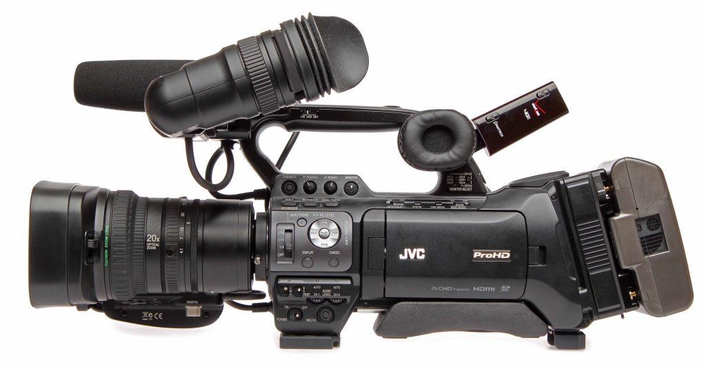 The cameras were purchased through JVC broadcast sales representative Digital Video Group (DVG) to upgrade the station’s aging Panasonic SD ENG camcorders to HD. “Not only does the upgrade deliver native HD acquisition in the field, but it offers native file recording for ingest without transcoding into our new Grass Valley Stratus/Edius post system,” Novitsky added. “Plus, now that we’ve moved to non-proprietary SD cards, our recording media is more accessible and less expensive.”

On average, WDBJ7 features three live shots from its new JVC camcorders during its nightly newscasts, in addition to live shots from our satellite and microwave trucks. “We have been very satisfied with our new fleet of JVC ENG cameras as well as our Broadcaster server,” Novitsky said. “We’ve got great video quality, reliable and cost effective live ENG reports from the field, and a happy news director.”