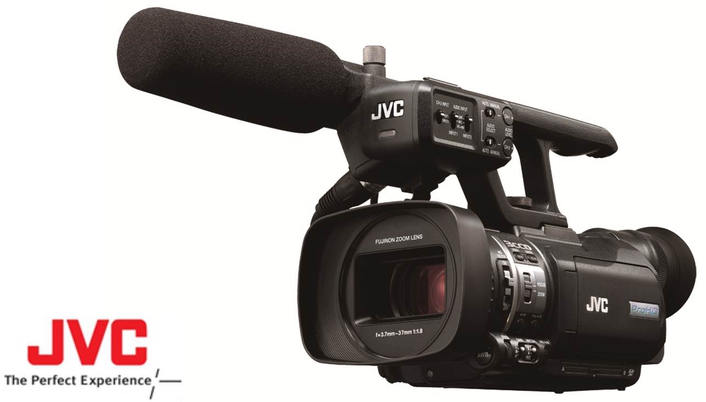 Next generation handheld features SD and HD recording options, fast editing workflow and native file format
At IBC 2011, JVC has introduced the GY-HM150 – the latest model in their popular ProHD handheld camera line. The GY-HM150 includes a range of technological improvements that offers users total flexibility and a fast editing workflow, including the option to record in both SD and HD formats and the ingenious Pre Rec mode.

New features and improvements for the GY-HM150

The GY-HM150 includes many of the design features that made the GY-HM100 successful, such as its three ¼-inch progressive CCDs with Diagonal Offset technology for pristine HD pictures and rich, lifelike colour, and JVC’s Focus Assist which makes accurate HD focusing quick and easy. Several new JVC technologies, including the newly developed Rotary Optical Image Stabilizer, are making their debut with this model, adding to its usability and performance. Other new features include:

·    Dual SDHC/SDXC Card slots with Simultaneous and Relay (Hotswap) Recording
The GY-HM150 records on widely available SDHC and SDXC memory cards, presently available in capacities up to 32GB. The camera provides 2 memory card slots, for a total of up to 64GB of on board storage - enough for up to 6 hours of continuous HD recording. The camera automatically begins recording on the second card when the first card is full in relay recording mode or you can use Simultaneous recording to easily create backup or duplicate files as you shoot without the need for any external equipment.

·    SD and HD recording modes
As the transition period from SD to HD production is still underway, the GY-HM150 meets the challenge of working with both modern and legacy systems by providing a true SD shooting mode in standard DV 25 Mbps format, recording to either MOV or AVI file format for direct editing within NLE systems.

·    Pre Rec Mode
Never miss your shot due to slow reactions again. Even if you don’t manage to hit that record button in time Pre Rec will save you. With Pre Mode enabled the camcorder continually buffers up to 5 seconds of video so that when recording is started the cached video is included in the recorded file, giving you up to 5 seconds’ head start. Great for sports and wildlife filming.

·    Other features
There are six user presets so that you can save your favourite settings for focus assist, colour bar, time code, zebra, etc. Both wired and wireless infrared remote controls are supported, and there is an improved high-resolution 2.7-inch LCD screen and view finder.

·    Ultra-compact 1.5kg handheld form factor
This makes it ideal for applications where a full size camera would be impractical, such as tight quarters and operating in potentially unsafe situations.

·    Fujinon 10:1 Zoom HD Lens
The GY-HM150 utilises a high definition lens by Fujinon, a world leader in HD lens technology. This lens features three aspherical elements and an Electronic Beam Coating (EBC) that greatly reduces degradation caused by light reflecting off the lens surfaces, leading to greater light transmission and reduced flaring and ghosting. To protect the lens, a flip-in cover is integrated in the lens hood, eliminating the need for an external cap. Focus is controlled manually or automatically. A smooth servo zoom is controlled with a conventional rocker on the handgrip, or manually with the lens ring. For close-up shooting, a macro mode allows for shooting subjects as little as 2-inches away from the lens. Exposure (iris) is manually or automatically controlled, allowing the shooter to adjust the depth of focus by selecting the appropriate F stop. In the manual iris mode, the current F stop value is displayed in the viewfinder.

·    Professional controls and layout
Despite its size, the camera's hand grip has an ergonomic shape, accommodating hands of all sizes. Control and switches are placed with professional users in mind. To conserve space, a single ring is used for both manual focus and manual zoom. Additional manual controls include white balance, shutter, gain, and audio levels.