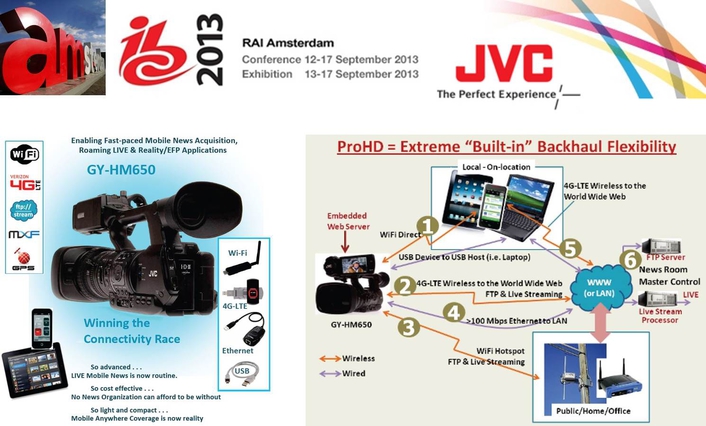 Products on show include a prototype 84" 4K monitor, professional camcorders, monitors and the new JVC OB truck: Stand 10.D45
JVC will be demonstrating three main product areas at IBC2 013: cameras, monitors and our new tour truck. The main highlight of the show will be the live streaming feature offered by the latest version of the GY-HM650 camcorder, which has the ability to stream broadcast-quality images whilst also recording full HD. In order to demonstrate this convergence of conventional broadcasting and streaming, JVC will broadcast a twice-daily show, streamed live from IBC, introducing the advantages of live streaming via the GY-HM650 camcorder.

JVC will also launch its latest GY-HM650 promotional tour at the show with a new truck that’s located in the outdoor area (OE111). This vehicle is fitted with the company’s camera products, and demonstrates mobile connectivity offered by the GY-HM650. Visit www.ultimate-mobility.eu to find out a little more about upcoming stops for the tour. 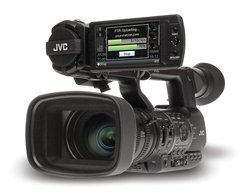 When equipped with Wi-Fi, 4G or 3G connectivity via USB, the GY-HM650 can stream live video transmissions via a network connection while simultaneously recording full HD footage. Thanks to the camera’s integrated dual encoder, it has never been easier to stream video via high-speed satellite networks, and no single ‘bit’ of your recordings will ever be lost. Many of our European customers also wanted the ability to stream SD images as well as 1280x720 and 1920x1080 full HD, so this has also been added to the camera’s functionality. With the latest version of firmware, the camera can now stream SD at a choice of 0.3 / 0.5 / 1.5 / 3 / 5 Mbps rates, 1280x720 HD resolution at 1.5 / 3 / 5 Mbps, and 1920x1080 resolution at 2.5 / 5 / 8 Mbps rates.

Equipped with three full-HD 1/3-inch 12-bit CMOS sensors and an integrated wide angle 23x autofocus zoom lens, the camera features exceptional light sensitivity of F12 at 2000 lux. And thanks to dual JVC codecs, it records ready-to-edit .MOV and XDCAM EXTM compatible MP4 or MXF files with rich, descriptive metadata on one memory card, while simultaneously creating smaller, web-friendly files on a second card. Alternatively, record on the main SD card and simultaneously transfer the material as a live stream via a network connection. Video can be broadcast in the background via FTP thanks to the ‘Clip Trimming’ function, which allows the user to select, copy, and dub particular sequences by a single button push, and it’s now also possible to directly control the metadata from the screen. In addition, the latest firmware update brings advances to the control and storage settings, together with improvements in image quality and an innovative autofocus algorithm.

To demonstrate this flexible camcorder, JVC will host a twice-daily show at IBC on the internet, introducing customers to the many possible applications for this camera and the advantages of live streaming. Thanks to the company, Blitzeinschlag (www.Video-Stream-Hosting.de), this live stream can be followed by up to 500 users on the company’s website at the same time. Outside of the live broadcasts, viewers will be able to follow the events as they happen from JVC’s IBC stand. 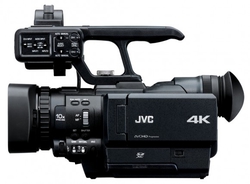 GY-HMQ10 handheld 4K camera displayed on the prototype PS-840UD 84" 4K monitor
The combination of the GY-HMQ10 camcorder and the new prototype PS-840UD monitor should make for impressive viewing at IBC. The PS-840UD (prototype) has a huge screen diagonal of 84" (215 cm) and a native resolution of up to 3840x2160 pixels. Meanwhile, the GY-HMQ10 camcorder is equipped with a 4K-compatible HD lens (F2.8, 10x zoom) and an innovative Falconbrid LSI (Large Scale Integration) chip that delivers extremely fast high-definition imaging. With its 1 / 2.3" CMOS image converter (8.3 million active pixels), the compact handheld camcorder delivers 24p and 50p recordings with resolution four times that of HD (3840x2160 pixels). The camcorder can also be used as a normal HD camcorder, since video can be recorded in full HD (1920x1080) at 50p or 50i in AVCHD format on a simple SDHC/SDXC memory card.

GY-HM600 handheld camcorder perfect for ENG and VJ applications
Like the GY-HM650, the GY-HM600 has also received a firmware update, with the following changes: two additional AVCHD modes have been added (1440x1080, 5 Mbps = EP mode); significant enhancements of the encoder in terms of the SD recording quality; an Expand Focus function that allows zooming and precise setting of the focus point; plus direct access to the favourites menu. Other improvements have been made to the adjustment settings of important signal parameters using the ‘Knee Point Setting’; the advanced white maximum has been increased to 103%; and there’s simplified application of the ND-filter, i.e., an overexposure warning. The new firmware (Version 2.04) is available for both the GY-HM600 and GY-HM650 and can be downloaded for free via JVC’s website at www.jvcpro.eu. 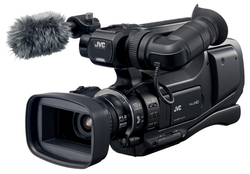 GY-HM70 cost-effective shoulder-mounted events camcorder
This cost-effective camcorder will appeal to event videographers and educational users who want a full-sized, shoulder-mount camcorder but have limited budgets. Built around a 1/2.3-inch 12 megapixel CMOS imager and JVC’s advanced FALCONBRID high-speed processor, the camera records 1080/50p, 1080/50i, and 576/50i (SD) footage in the AVCHD Progressive format to dual SDHC/SDXC memory cards. The GY-HM70 offers a number of innovative features, including JVC’s hot-swappable dual battery system, which allows for hours of continuous, uninterrupted shooting. It also includes a high quality 29.5mm wide-angle GT lens that offers smooth 16x dynamic zoom performance, as well as an optical image stabilizer, auto focus, focus assist, and manual focus, iris, and shutter controls. The GY-HM70 has excellent low light performance, making it suitable for documentaries, events, weddings, conferences and other situations where artificial light wouldn’t be desired. In addition, the camcorder features intelligent automatic functions and special features including time lapse recording from 1-80 seconds and a slow-motion function to record at speeds of up to 250 frames per second.

JVC’s other camcorders on display at IBC
JVC will be demonstrating its compact GY-HM150 handheld camcorder, which offers full HD 35Mbps recording to SDHC/SDXC cards in ready-to-edit formats such as QuickTime (.mov), XDCAM EX or MP4. And weighing just 1.4kg, the GY-HM150 is the ideal camcorder for journalists, VJs, and those relying on mobile flexibility and a fast workflow. Also on show will be the broadcast-quality shoulder-mount GY-HM750 camcorder, which offers the same simple shoot-to-edit workflow via a choice of .MOV and .MP4 file formats. Recording 720p, 1080p or 1080i images at up to 35Mbps to readily-available SDHC/SDXC cards, the camera can record to both card slots simultaneously for backup purposes, or switch between slots for seamless relay recording. Optionally, the model allows for recordings in SD (576i) at a data rate of 25 Mbps. Finally the flexible GY-HM790 studio camera will be on display as both an ENG camera and also with its FS-790 fibre system in studio configuration. Perfect for a wide range of applications, including live events, sport, documentaries and news, the flagship GY-HM790 delivers an exceptional image, and the same fast editing workflow as offered by all JVC camcorders.

Professional monitors
JVC is well respected for its professional monitors for both production and presentation applications, and IBC will play host to the full range from the company. There will be the flagship DT-V Series and DT-E Series of professional production monitors, the portable DT-X Series models, and two new large screen LCD models - the PS-420W and PS-470W. In addition, JVC will be showing its new full HD 55" IPS monitor - the GM-552 – along with a new monitor bridge (DT-X51HX3) that features three HD LCD panels. With exceptional image quality and high reliability, JVC’s monitors deliver the features and performance that professionals demand.