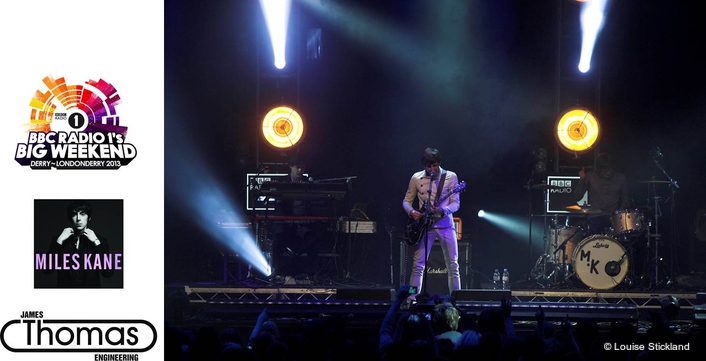 Miles Kane performs at Radio 1 Big Weekend infront of JTE PATT 2013
Lighting and truss manufacturer, James Thomas Engineering, and lighting designer, Tim Routledge, have collaborated on an exciting new project to create a range of retro-look lighting fixtures with a modern twist. Spectacularly combining old school aesthetics with a modern output and build quality, the JTE PATT 2013 is the first of this range to be released.

The JTE PATT 2013 is a 750W tungsten softlight housed in a beautifully sleek spun aluminium body which maximises its curves to look as good on stage as the performers it illuminates. “We purpose-designed the PATT 2013 as ‘eye-candy’, intending it as neither key light nor beam light, but simply to look good both on stage and in camera,” says Routledge. “It provides a big round circle of light within a beautiful circular yoke - it’s a really elegant piece of design.

“The current fashion for retro-look lighting fixtures is very strong and as lighting designers we are always looking for something which stands out from the crowd. However, old fixtures come with the incumbent problems of being expensive to hire and hard to maintain, so we have been contemplating the creation of a range of tungsten lighting fixtures that give a modern take on a retro model. With this we can have a choice of stylish fixtures with a contemporary build that are more reliable than the original models and on which we can expand as fashions change.”

Routledge turned to James Thomas Engineering with his ideas. “Tim approached us saying: ‘Everyone is making LEDs, why don’t you make some cool stuff based on your heritage of tungsten fittings?’” says JTE’s Paul Young, “to which we replied: ‘Tell us what you want and we’ll make it!’” Routledge obliged by providing JTE with a wish list and worked closely with JTE’s Sean Aston, to come up with the final result. 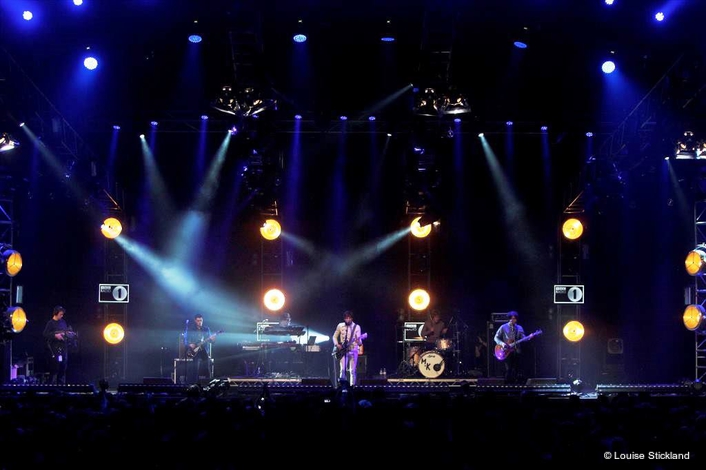 Taking inspiration for its appearance from old broadcast equipment, Aston designed the PATT 2013 around an easily available, reliable modern light source, the 750W HPL lamp. “The PATT 2013 has been designed and manufactured using all the traditional techniques we are associated with,” says Aston. “The reflector is a parabolic aluminium spinning and the internal surface is coated in translucent gold. I felt a size of 600mm overall diameter and approx 300mm depth suited Tim’s design idea perfectly and the whole concept came pretty quickly from there. I am delighted with the result in terms of the PATT 2013’s aesthetics and the output does justice to the concept too.”

“JTE was totally open to all ideas and has the manufacturing facility to instantly put together experimental designs until we reached what I wanted to achieve,” says Routledge.

JTE was able to draw on its in-house design experience and manufacturing facilities to ensure a fast result. The project was completed within two months with the designs being created remotely from Tim’s suggestions using solid computer modelling and photos of each mock up relayed to him on site.

Routledge incorporated twelve of the new JTE PATT 2013s into his design for the In New Music We Trust stage in the Radio 1 Xtra Arena, positioning them upstage of the bands and on side trusses at stage level to supply that all-important ‘eye candy’.

“The PATT 2013s not only looked great but were homogenous with the tungsten light bulbs we used around the stage and gave lots of background interest for the cameras,” says Routledge. “In fact they looked so cool that the broadcast director, Paul Dugdale, lined up his camera angles to include them in as many shots as possible!”

Its beautiful form and eye-catching appearance has sparked an instantaneous response following this first outing, generating numerous enquiries from lighting designers and high levels of interest on Facebook. The name ‘PATT 2013’, which came from Martin Lockett of Production Resource Group following a Facebook campaign to name the new fixture, was chosen because it encapsulates the original design intention by making reference to the good old days of lighting in a modern context.

“The PATT 2013 is the first in a new range of modern retro designs from JTE and takes us back to what JTE does best, as evidenced from our past history with the creation and production of the Parcan,” explains Young. “That is, producing good value products on a quick turnaround using all the traditional skills we have available in house.”