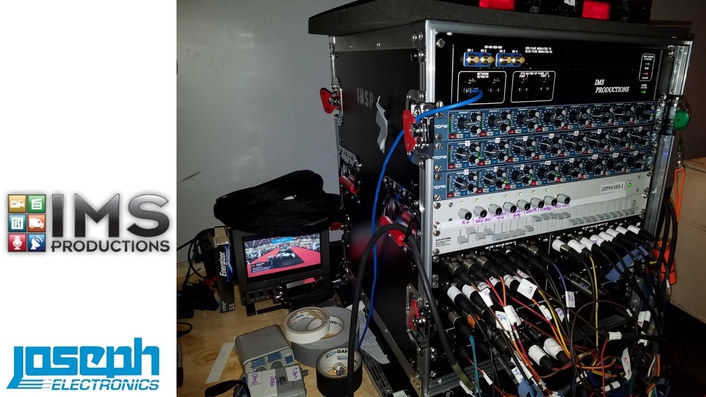 Joseph Electronics (JE), the premier one-stop shop for the broadcast industry and provider of fiber termination and custom fiber solutions, today announced that Indianapolis-based outside broadcast (OB) company IMS Productions has purchased a custom fiber booth kit for use in its IMSP-HD 1 mobile unit. JE designed the kit to IMS Productions' specifications for transporting video, audio, and communications between announce booths and the OB truck during live sports, entertainment, and related broadcasts.

"When it came time to replace our aging booth kit, we had a definite idea of what we wanted. One of the reasons we purchased from Joseph Electronics — and why we have been a customer for so many years — is because we could customize the kit to do exactly what we needed instead of buying something off the shelf and having to retrofit it, which is common in our industry," said Robby Greene, president of IMS Productions. "Joseph Electronics is arguably the best in the business at moving signals around in the field. The team designed a box that saves time for our remote-production crews and has the dependability we've come to expect from Joseph Electronics."

Because IMSP-HD 1 does not currently support Hydra box technology, the new direction for audio flow, IMS needed a seamless booth solution that did not exist anywhere in the market. JE designed a unique booth package that interfaces multiple emerging technologies just as IMS had envisioned. Now it is possible to connect the truck to various audio sources and move the signals from place to place over two to four fibers with automatic optical switchover for redundancy. Especially useful are the HD-SDI, Gigabit Ethernet, and RTS ports. In addition, JE built the booth pack with a modular design that allows for easy expansion to accommodate future growth.

Purchased primarily for use during Mecum Auctions, the booth kit will also cover a wide variety of other events ranging from Indiana Pacers home games to boxing matches and auto races to talent shows and concerts.

"IMS Productions is the mobile production company behind some of the biggest sports and entertainment broadcasts in all of television, including IndyCar racing, and we're honored to have been working with the company for well over a decade," said John Cleary, president of Joseph Electronics. "This project was a challenge because we had to build a custom box around some of IMS Productions' existing gear, but because of the close communication and working relationship between our teams, IMS now has a reliable booth pack that gives them exactly what they wanted and nothing they didn't need."

About Joseph Electronics
Joseph Electronics (JE) is an authorized stocking distributor for more than 100 premier broadcast and pro A/V brands with stocking locations in both Illinois and California. JE also designs, manufactures, and supplies innovative custom fiber solutions — such as the Caddie Series, DFT Series, and 4K fiber transport gear — for broadcasters and system integrators alike. Equipped with a state-of-the-art fiber lab staffed with fully certified professionals, JE can fabricate, terminate, or repair any connector, assembly, panel, breakout, or interface in use today. JE has served the broadcast industry for more than 65 years and has representatives in California, New York, Colorado, Georgia, and London.