The John Lennon Educational Tour Bus Takes AJA Gear on the Road in the U.S. and Europe 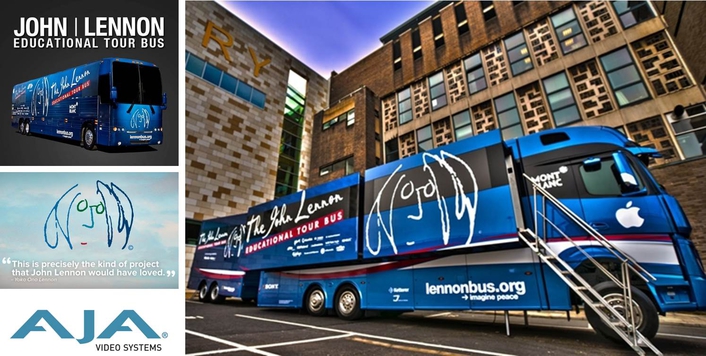 .
Non-profit group The John Lennon Educational Tour Bus has provided American students of all ages with free, hands-on opportunities to make original music, video, photo, game app and broadcast projects for the past 16 years via a mobile studio-in-a-bus that has been on the road since 1998. Featuring state-of-the-art audio and HD video recording, the bus has visited schools, colleges, concerts, festivals, trade shows and museums in big cities, small towns, rural areas, severely underserved communities and everything in between. On May 8th, 2013, Yoko Ono Lennon debuted the new Lennon Bus Europe in Liverpool, set to kick off its inaugural tour in London in June and continue with travels across the UK and Europe.

Lennon Bus Chief Engineer Jeff Sobel designed Lennon Bus Europe from scratch. Based on past positive experiences with AJA gear, Sobel outfitted the vehicle with AJA Ki Pro Rack and Ki Pro Mini tapeless recorders along with a KONA 3G card for video capture and output. In addition to HD capabilities, Sobel needed workflow tools that would be compatible with Apple® Final Cut Pro® and Avid® Media Composer®, which are both used on the bus to edit student projects and music videos.

“I wanted a solution that would not just be compatible with Final Cut and Media Composer but one that would really make both scream, so that’s why we went with the KONA 3G card,” said Sobel. “I contacted AJA about what the production needs would be on the bus and also ended up choosing Ki Pro Mini and Ki Pro Rack, powerful pieces of gear that facilitate multiple needs and also take up very little space.”

The Lennon Bus has an exhaustive touring schedule, with two full-time on board engineers and a driver facilitating recording sessions and video productions at each stop where students might write, perform, record and produce original creative content over the course of a given day. 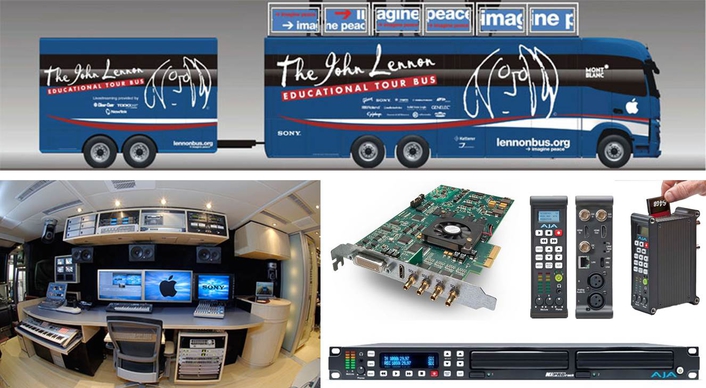 “The Ki Pro Mini gives us a reliable means of storage with easily available and easily swappable media that records in native file formats. That lets our editors immediately begin working without having to transcode. For us, it’s really all about the speed; these are one-day projects from start to end. Everything gets done on board the bus, and the Ki Pros and KONA cards are vital, because they speed up our production workflow,” Sobel continued.

Given the hands-on nature of the experience, the equipment on the bus must also withstand frequent and rigorous use.

“We have students of all levels, so we really sculpt each day’s project to fit with whoever is on board. The studios and gear on the Lennon Bus are in use almost every day,” explained Brian Rothschild, executive director of The John Lennon Educational Tour Bus, who started the organization with Yoko Ono Lennon in 1998. “The reality is that the work we are doing is really of value almost anywhere that we might find young people.”

Added Sobel, “To be honest, we are not very easy on our gear. We try to treat everything the best we can, but it is a mobile environment and the portable devices are in the hands of students, who are not trained professionals. They’re under close supervision, but they don’t always treat things the way professionals who have accountability to their equipment do. We need tough equipment, and the craftsmanship of AJA technology really shows. We’ve also had an Io HD on our US bus for years and it’s built like a tank and has always been reliable.”

A more than ten-year veteran of the Lennon Bus, Sobel has seen remarkable changes in audio and video technology and is consistently updating the gear configuration on the US bus, which has been on the road since 1998, to keep everything up-to-date. He guided the 2008 redesign of the original Lennon Bus, which relaunched as a completely new vehicle capable of working in HD. Sobel’s quest for video interfaces and solutions to complement new HD cameras provided by Sony is what first led him to AJA’s KONA cards and the Io HD, a portable FireWire device that enabled editors to encode Apple ProRes HD video to portable MacBook Pros. He has also made use of multiple AJA Mini-Converters.

“We often forget the AJA gear is there, because it just works,” Sobel mused. “Their technologies are like the invisible connections that make everything work – and it’s effortless to setup. With the KONA 3G card – which is a very advanced piece of equipment that does amazing things – you literally just pop it into the computer, load the drivers and suddenly this beautiful image is coming out on your monitor or being captured in. It integrates into the editing software and into the computer without any actual work. Having really tight deadlines, anytime I can just pop something in and have it work – especially when it performs such a key role – makes me very, very happy. Once it’s in, it just keeps working and we just never even think about it. That is life saving.”

Projects created on either Lennon Bus can be viewed on its YouTube page.

Concluded Rothschild, “With John Lennon’s name on it, we certainly have a big focus on music and songwriting since that is his legacy, but we’ve really evolved into film and video documentaries and broadcast projects, we’re doing more live streaming and will continue to include AJA technology as part of our toolset. I see the evolution continuing as everything else evolves.”

Since 1993, AJA Video has been a leading manufacturer of high-quality and cost-effective digital video interface, conversion, acquisition and desktop solutions supporting the professional broadcast and post- production markets. With headquarters in Grass Valley, California, AJA maintains an extensive sales channel of dealers and systems integrators around the world.