John Delf Needs No Plan B with Soundcraft Vi6™ 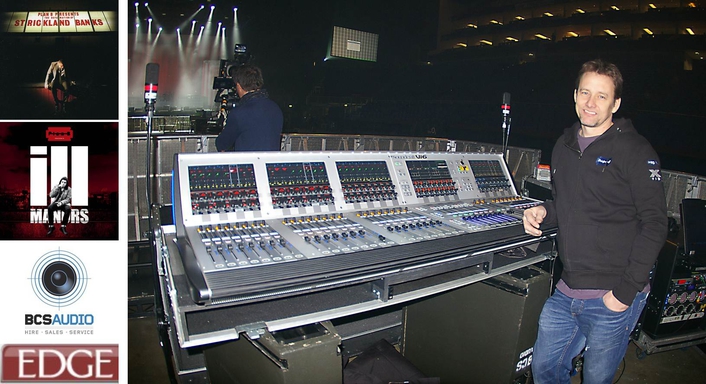 .
Highly experienced sound engineer John Delf, has exchanged the HARMAN Soundcraft Vi1 he has been using recently on club duty, with fast emerging London girl trio Stooshe, for the larger Vi6 for the edgy soul/hip hop of Plan B (Ben Drew) on the arena circuit.

Supplied as part of a complete PA package by Dave Shepherd’s BCS Audio, the UK arena shows have been split into two distinct sections, featuring Plan B’s 2010 album, The Defamation of Strickland Banks in the same track order, followed by the soundtrack of his hardcore London gangland movie Ill Manors in the second (complete with harrowing visuals).

Supported by six projectors—firing onto three screens plus IMAG at London’s O2, where a DVD was also being recorded—it was an exacting challenge for Delf, his system tech Dave ‘Boxx’ Cann and Shepherd himself (who assumed production management duties). Aside from the mix, the FOH engineer was using time code to sync to the screens, supplying click tracks and recording to multitrack from the Vi6’s optical MADI onto hard disc recorder.

This task was made easier by the Soundcraft mixing platform that Delf first experienced at KOKO in London (where a Vi6 is installed). Although experienced in all digital operating systems, he says the Vi6—with stage rack giving a 96-channel capability—is perfect for many bands, Plan B being one.

“I have liked the Vi6 since the first time I used it,” Delf said. “I know it’s a popular thing to say, but I am very impressed with the preamps. The Vi6 just gives a bit more crunch and edge, which suits this kind of gig more, particularly with the hip hop section. It has a real clarity to it. A creative sound engineer realises that not all desks sound the same—it’s like a guitarist choosing a Fender Strat for one type of sound and a [Gibson] Les Paul for another.”

In addition, Delf loves the fact that he can get a complete visual reference of the show across the top page of his board—particularly useful on this show, which carries a 10-piece ensemble, including percussion, acoustic guitars, drums, bass, keyboards, two BV’s and two rappers.

John is running 42 inputs on this tour. “You can spend your whole time mixing with the mouse [on some desks] but because of the Vi6’s 32 faders your whole show is in front of you. I only turn to the second page once in a while.”

Most of the system dynamics are straight off the board. “I use a subtle amount of reverb and a lot of EQ and some compression on the mix.”

But again the Soundcraft Vi6’s unique FaderGlow provides the wizardry. “It is extremely useful; with everything in front of you it is possible to see what has EQ on it and what has compression, you can see if the inserts are on. When you hit the graphic all the faders become EQ and change to red, so you know you are in graphic mode.”

John Delf started his career in the studio world, and still runs Edge Recording Studios in Cheshire. His first tour of duty many years ago was with Mark Burgess and the Chameleons — and he’s not looked back since, working with many big names along the way, including Lily Allen and The Script.

He landed the gig with Plan B after working with Eliza Doolittle and supporting him at the O2. She was also asked to support American dates and John was asked to double on Plan B for a seven-day stint. “But it turned into six weeks,” he chuckled. “The first gig was at Coachella [Coachella Valley Music and Arts Festival] and I was thrown right in at the deep end. Plan B is a perfectionist and wants everything to be right.” They also played some festivals in the Balearics, including Mallorca Rocks.

“He’s quite a dynamic singer but I was told to make sure his vocal was audible, with no feedback, because his in-ears are turned up really loud. It was a challenge.”

John Delf does not use snapshot or scene recalls, but prefers to mix live over his show file. Via the multitrack hard disc, the sound engineer is able to use the console’s virtual sound check facility, but overall he says, “It’s the workflow and sound quality that make the Vi6 special; it’s as near to an analogue desk in layout as anything I have used.”