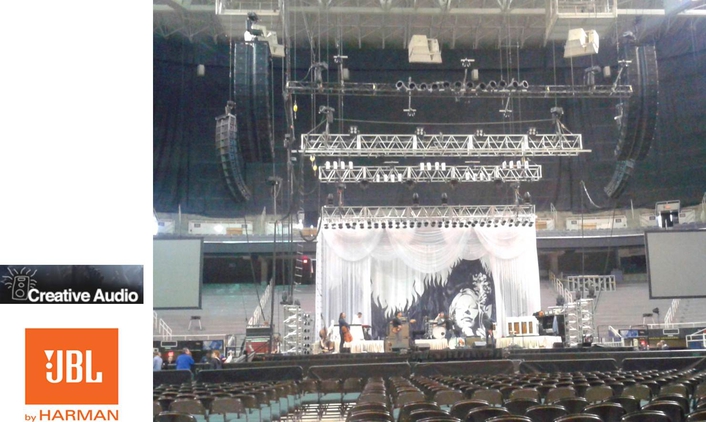 Creative Audio recently deployed its JBL VTX line array system at a sold-out New Year’s Eve concert in Greensboro
Creative Audio is a company that lives up to its name, always on the lookout for new and better products that enable the company to deliver better sound and lighting to its audiences and clients. For years, Creative Audio has supported country, comedy, rock and pop music tours in the U.S. and Canada for artists ranging from Larry the Cable Guy and George Lopez to Trace Adkins for his 2012 “Songs and Stories” tour. Adding HARMAN’s JBL VTX Series line array loudspeakers to its inventory was Creative Audio’s logical next step.

“We own and are very happy with our JBL VerTec™ VT4888 line array loudspeakers—in fact, we own more than 100 VT4888 and VT4880 subwoofers combined—but our company had grown to the point where we needed to find a line array speaker that was more suited to large concerts,” said Chris Mentzel, Owner of Creative Audio. “JBL’s new VTX Series line arrays were announced around the same time we started looking, so the timing was perfect.”

“We looked at other line arrays but the VTX Series was our first choice, and we knew that if we went with anything else we might regret it,” Mentzel added. “When I found out that other major tour sound companies were starting to use the VTX Series, that also helped with our decision.”

The sheer output of the VTX line array elements is amazing, Mentzel pointed out. “We’re finding that you don’t need to use as many boxes as in the past with other line arrays,” he said. “In that sense, the VTX Series can actually save you money and space. The improved clarity and smoother frequency response are readily noticeable, as is the even coverage pattern.”

“As a sound contractor there’s another practical consideration we have to deal with—our gear has to be rider-friendly,” noted Mentzel. “I think it’s clear that more and more artists, promoters and venues are going to be specifying the VTX Series in light of their exceptional performance.”

Creative Audio has already put its new VTX system to the test at a number of events, including the Southern Illinois Country Fest at the Worldshooting and Recreation Complex in Sparta, Illinois. For the 3-day festival, Creative Audio deployed a left-right configuration of 12 V25 fullsize line array elements per side, while ground-stacking nine G28 subwoofers per side.

“The first night the headliner was Trace Adkins, the second night was Dierks Bentley and the third night was Tim McGraw,” Mentzel said. “Every engineer working the festival loved the system. That was also the very first time we used the rig and we were blown away.”

“As has been our experience since purchasing the rig, the VTX system filled the arena with no problems,” Mentzel concluded.