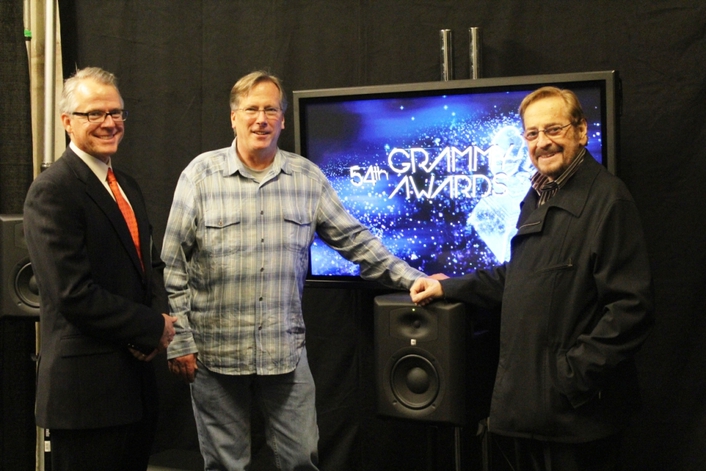 The annual GRAMMY Awards telecast, known as Music’s Biggest Night®, is presented by The Recording Academy to honor outstanding achievements in the production and performance of recorded music. The GRAMMY Awards were broadcast live in HDTV and 5.1 surround sound on the CBS Television Network. More than 39.9 million viewers watched this year’s Awards telecast, making it the second most-watched GRAMMY Awards in history.

This year’s awards featured performances by some of the biggest names in the music industry, including Bruce Springsteen, The Beach Boys, Bruno Mars and others, highlighted by a special performance by Glen Campbell and Jennifer Hudson’s tribute to Whitney Houston. Adele earned multiple GRAMMY Awards, including Song Of The Year and Record Of The Year for “Rolling in the Deep,” and Album Of The Year for 21.

“As we have for the past several years, we relied on the LSR6300 Series studio monitor system to carefully listen to details in the mix,” said Michael Abbott, Audio Director for the GRAMMY Awards. “The LSR monitors helped us accurately hear the subtleties of the show, which resulted in the successful delivery of high-quality audio to millions of viewers around the world.”

Several producers and engineers used LSR studio monitors for GRAMMY-nominated projects this year. Lady Antebellum earned Best Country Album honors for Own the Night, which engineer Clark Schleicher recorded and mixed with his LSR6300 system. In addition, previous GRAMMY winner Frank Filipetti was nominated for a 2012 GRAMMY for Best Surround Sound Album for the 5.1 mix of An Evening With: Dave Grusin. Filipetti also recorded and mixed the original cast album for The Book of Mormon, which earned the Best Musical Theater Album GRAMMY award.

“It’s an honor to see some of the world’s most accomplished audio professionals using JBL LSR studio monitors on Music’s Biggest Night,” said Michael MacDonald, Executive Vice President of Marketing and Sales, HARMAN Professional. “We are also pleased that LSR monitors were used in a number of GRAMMY-nominated projects. Our congratulations go to the nominees and winners, and to the production team for another successful GRAMMY telecast!”

Headquartered in Northridge, California, JBL Professional is the world’s leading manufacturer of loudspeakers used in demanding recording, post-production and broadcast applications and facilities worldwide. JBL Professional is the recipient of numerous awards including a prestigious Technical GRAMMY® Award “for continual mastery and innovation…to ensure exacting standards for the most accurate sonic experience.” JBL Professional is part of the Harman International network of professional and consumer audio companies.