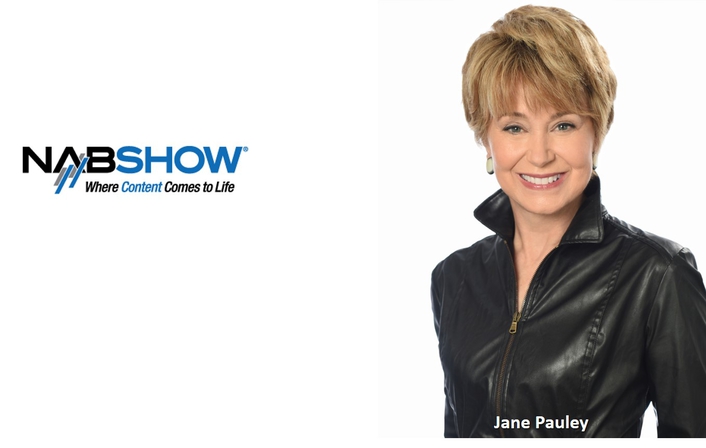 Renowned journalist and host of “CBS Sunday Morning,” Jane Pauley will emcee the 2017 NAB Show Opening on Monday, April 24 in Las Vegas. NAB Show is the world's largest media and technology convention, encompassing the development, management and delivery of content across all mediums.

Hearst President and CEO Steven Swartz is headlining the event, and National Association of Broadcasters President and CEO Gordon Smith will present the “State of the Broadcast Industry” address.
Pauley began her network career as co-host of “TODAY” for 13 years. She then anchored “Dateline NBC” for more than a decade and also hosted her own daytime program, “The Jane Pauley Show.”

“Jane Pauley is one of broadcast television’s most familiar faces,” said Gordon Smith. “We look forward to sharing the NAB Show stage with her and are honored to have her assistance in opening the world’s greatest media, entertainment and technology event.”

Pauley is the recipient of multiple Emmy Awards, the Walter Cronkite Award for Excellence in Journalism and the Edward R. Murrow Award for Outstanding Achievement. She is also the author of two New York Times Bestsellers: “Skywriting: A Life Out of the Blue” and “Your Life Calling: Reimagining the Rest of Your Life.”

About NAB Show
NAB Show, held April 22-27, 2017 in Las Vegas, is the world's largest electronic media show covering the creation, management and delivery of content across all platforms. With more than 103,000 attendees from 166 countries and 1,700+ exhibitors, NAB Show is the ultimate marketplace for digital media and entertainment. From creation to consumption, across multiple platforms and countless nationalities, NAB Show is home to the solutions that transcend traditional broadcasting and embrace content delivery to new screens in new ways.