The newly-launched JT Truss was chosen by lighting designer Graham ‘Grum’ Leesmith who needed to re-create a smaller, ‘festival-friendly’ version of the one he used on Example’s international arena tour.

The truss is configured as two 4.5m diameter octagonal lighting rigs with each octagon composed of eight 1.5m sections of JT40 truss. These are joined by custom-made 45° corners and suspended above the stage where they form the main part of the full flown tour rig. In addition to being major design features, each octagon needed to be strong enough to support a substantial lighting rig of PixelRange SmartLines, PixelRange PixelSmarts, Clay Paky Sharpys, Martin Atomics and MAC Auras, yet be light enough to transport between festival sites and quick to erect and dismantle.

Grum turned to James Thomas Engineering for a solution. “I originally approached JTE with their folding X-Truss in mind but discovered the new lightweight JT Truss in the process,” says Grum. “I was amazed by it at first sight! The JT Truss is significantly lighter than the trussing we use for the arena tour so was far more suitable for festival stages. Yet, despite being half the weight, it has the same weight-bearing as standard truss.” 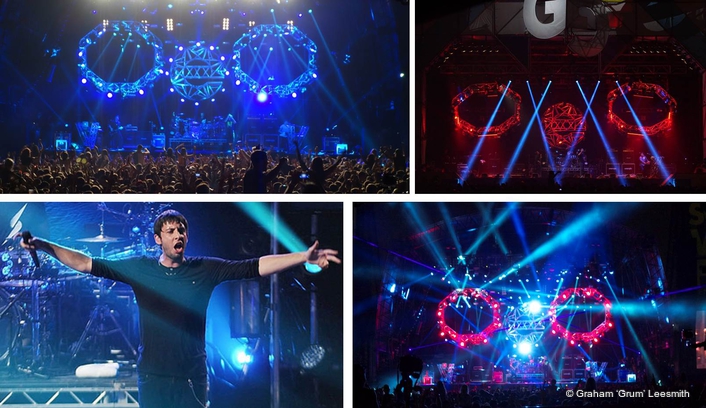 “The tapered pin system made it very quick to put together which was an important feature,” says Grum. “The octagons are broken down into their component parts for transit between festivals so speed of construction was vital, especially with the fast turnarounds demanded by the festival circuit.

“The guys at James Thomas went that extra mile to customise the corner joints to fit the specification for the unusual shape of the rig and worked to an incredibly quick turnaround of 1-2 weeks.”

The JTE truss travelled the festivals with Example from June to August starting with Rockness and Parklife, and continue with dates at the Isle of Wight Festival, Glastonbury, Global Gathering, Wakestock, SW4 and Sundown.