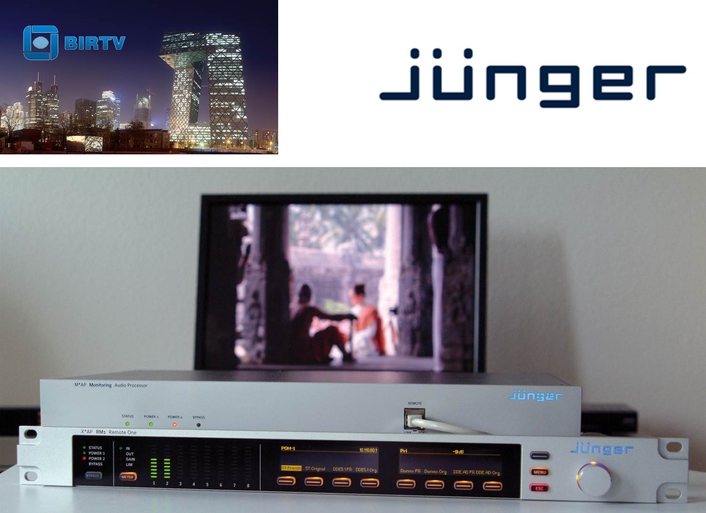 Please visit Junger Audio at BIRTV 2012 - Booth 8.B30 - for a demo.
Dynamics specialist Jünger Audio will focus on controlling audio loudness in the broadcast chain at this year’s BIRTV convention in China (August 22nd – 25th. Booth 8.B30). On show for the first time will be M*AP, the latest addition to Jünger Audio’s Award-winning *AP family of audio loudness processors.

This monitoring processor combines an audio monitor controller and a loudness measurement device in one unit, thus providing comprehensive quality control and loudness monitoring for anyone working in a production or broadcast environment.

Designed for quality checking surround (5.1) and/or stereo programs, M*AP can be used for live monitoring and also to ensure compliance with Government regulations on loudness. The unit comes with alarm signals that alert the operator when pre-set loudness thresholds are exceeded, and these signals can be delivered by simple GPOs and/or SNMP traps, which carry actual loudness values.

Alongside loudness measurements, M*AP also offers functionality for acoustical QA. It has eight speaker outputs that allow for A/B checking of stereo compatibility of a surround downmix through alternative speakers, as well as via L/R front speakers.

Peter Pörs, Managing Director of Jünger Audio, says: “By incorporating 3G, HD and SD auto detection, M*AP gives users the option of dealing with all 16 channels of SDI embedded audio at the same time. This means that you can listen to one program while permanently logging the loudness of two (5.1 +2 mode) or four (4x2 mode) programs. It is also possible to send further embedded programs to M*AP’s AES outputs to feed a third party instrument for analyzing and/or display.”

For no extra cost, the M*AP’s SDI board acts as an embedder as well and comes with video delay to compensate for any kind of audio delay. This feature is ideal for those looking to maintain lip sync in QA suites or control rooms. M*AP also features a built-in Dolby® Metadata generator and an optional Dolby® decoder that allows users to decode Dolby-E, Dolby-D (AC-3) and Dolby Digital plus (E-AC-3).

Jünger Audio will also be showing the rest of the products in its *AP family, including the award-winning T*AP television audio processor, the D*AP LM4 and the D*AP LM2. All three incorporate Version II of Jünger Audio’s renowned LEVEL MAGIC™ adaptive loudness algorithm, which is compliant with all current broadcast audio loudness recommendations including ITU 1770 (versions 1 and 2), ATSC A/85, ARIB TR-B32 and EBU R128.

T*AP is primarily designed for TV playout and provides Loudness control, Upmix and surround sound processing for up to eight channels of audio (8x1, 4x2, or 6+2). It focuses on automatic and adaptive loudness control and also offers Jünger Audio’s Spectral Signature™ as standard. This remarkable proprietary technology gives TV and radio broadcasters the ability to create a signature mask as a template so that they can recreate the same atmosphere and dynamics on subsequent audio content. Optional Dolby Decoding and Encoding (D, D+, or Pulse), as well as metadata management, are also provided along with 5.1 Downmix and Jünger Audio’s 5.1 UPMIX circuit, which has been upgraded to deliver greatly improved performance and a range of new settings.

The D*AP LM4, a four-channel Digital Audio Processor aimed at television broadcasters and video production and post-production companies that need to control audio loudness while creating and editing broadcast content. Similar in concept to the hugely popular Jünger Audio B46 processor, which it replaces, the D*AP LM4 also features on board AES/EBU digital I/O, along with optional 3G/HD/SD-SDI I/O or analogue I/O. This combination of formats is likely to open up many new markets for the unit. Control of this 19” rack-mountable unit is via a smart new front panel or via a Web interface for those who wish to operate it remotely.

The D*AP LM2 is a two-channel Digital Audio Processor that replaces Jünger Audio’s ground breaking D06 unit. The D*AP LM2 offers a powerful combination of dynamics and loudness control, making it suitable for a wide range of applications including television, radio, music production and PA. It can handle both analogue and digital (AES/EBU) audio and features an automatic input switchover with parallel output formats. It also fits neatly into a rack and is controllable through a newly designed front panel or via a Web based interface.

Both the D*AP LM2 and D*AP LM4 come with optional redundant PSU and a power fail bypass to ensure maximum operational security. They also feature Jünger Audio’s Adaptive Dynamics as standard, allowing customers to incorporate additional processing blocks such as compressors and expanders. Spectral Signature™ will become an option for these processors. Junger Audio is completing its BIRTV line up with Loudness Logger, a powerful tool that offers customers of all Jünger Audio levelling processors an easy way to monitor the development of the loudness over time. This innovation is critical to all broadcasters who now need to show precisely how their audio levels are performing in order to comply with new legislation on Loudness. Using this new software, broadcasters can monitor in real time or by analyzing previously stored loudness log files. The software, which is an MS Windows application, can be purchased from Jünger Audio on a license basis per PC and is protected by an USB dongle. The Loudness Logger works with Jünger Audio’s entire range of new box processors as well as with recent versions of LEVEL MAGIC™ cards in the modular C8000 system.