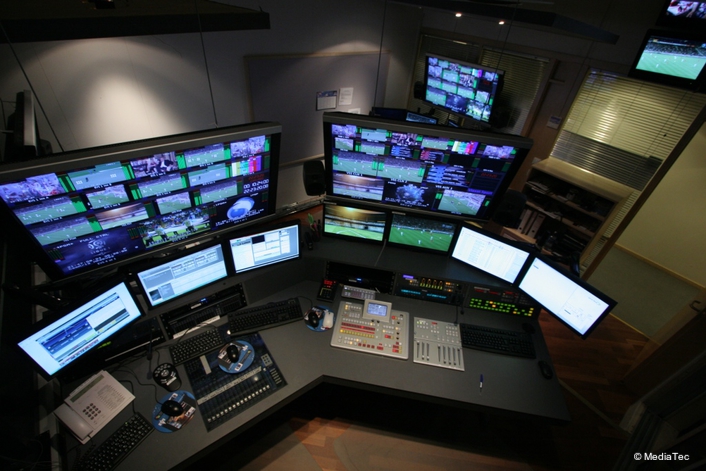 Transmission Control centre with Level Magic
Mediatec, one of Europe’s largest corporations working with technical solutions for event and television productions, has invested in Jünger Audio’s LEVEL MAGIC™ technology to ensure the quality of its HD-SDI audio signals.

In recent months Mediatec Broadcast has installed Jünger Audio’s modular C8000 LEVEL MAGIC systems in facilities it has built for two different clients. On both occasions the equipment was chosen because it could encode and decode Dolby E and D.

Jünger Audio’s LEVEL MAGIC is a sophisticated adaptive level control algorithm that is designed to adjust the level from any source at any time, with no pumping, breathing or distortion. It is based on a simultaneous combination of an AGC, a Transient Processor for fast changes and a “look ahead” Peak Limiter for continuous unattended control of any programme material, regardless of its original source.

Capable of using any kind of I/O (Analog and Digital) sources, as well as SDI, HD/SDI, Dolby 5.1 and all its related metadata, LEVEL MAGIC is available in a variety of configurations to suit different applications.

Arne Stenstadvold, Mediatec Broadcast’s unit manager who is responsible for the various studios and control rooms operated by the Group in Oslo, Norway, says: “At this facility we have two transmission control rooms transmitting three channels. We also have one studio with a production control room.

“Over the last few years we have handled the playout for a local sports channel and during that time we used Jünger Audio limiters to provide viewers with an enhanced listening experience. However, in 2009 we were asked to build a completely new control room for the channel and for its new sister channel. As part of the installation we bought a Jünger Audio C8000 modular LEVEL MAGIC system with processing for two channels. This includes full DOBLY E/D decode/encode for one of the channels. It is now fully operational.”

Mediatec Broadcast also specified a Jünger Audio C8000 system for another project – this time in a single channel HD format but with scope to expand it in the future.

“On both occasions the units were chosen because we needed a transmission limiter solution that could process HD-SDI with embedded audio,” Stenstadvold says. “The C8000 is just such a system. For the first project we specifically needed something that could handle regular audio processing and also help us process and swap between DOLBY D 5.1 and 2.0. The Jünger Audio C8000 system can do this very easily. The second system didn’t need to be so advanced but we still opted for the C8000 because we knew that it could handle the job so well.”

The simplicity of using the C8000

Stenstadvold adds that the C8000’s ability to process and convert DOLBY E/D makes it a very powerful and flexible solution for our first system. For the second system the simplicity of using the C8000’s HD-SDI interfacing meant that it was very easy to integrate it into our signal flow.

“The units we have acquired are all working fine and we are very happy with their processing flexibility,” he says.