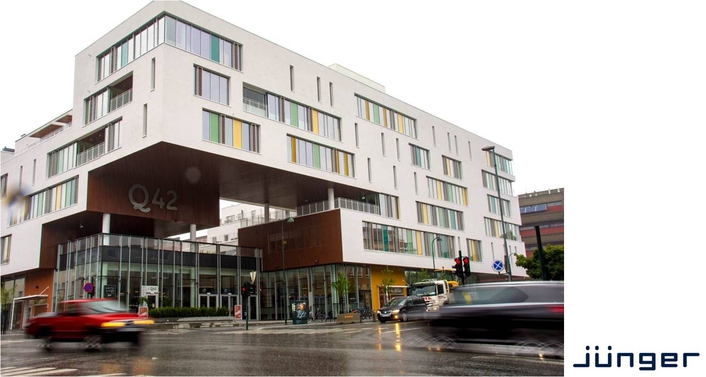 The church is now using Jünger Audio’s D*AP4 Digital Audio Processors to control and regulate audio for its TV and radio output.

The Pentecostal Church Filadelfia has installed Jünger Audio loudness processing to control the entire audio output from the media centre in its new Q42 complex in Kristiansand, Norway.

Almost the size of an entire block, the Q42 complex incorporates housing for the elderly, a congress centre, a leisure centre, a 1300-capacity concert hall, a small hotel, a restaurant and a media centre complete with TV, radio and sound control studios and an edit suite.

“In the middle of this are two Jünger Audio D*AP4 LM digital audio processors, which control the audio levels of all content before it exits the building,” he says. “We had to juggle the budget to make room for this technology, but it was the best money we ever spent because it has delivered what we need: transparent loudness processing for our live stream, recordings and national DAB radio.”

Schaathun discovered Jünger Audio loudness processing when he was researching audio meters for the new complex. Peak processing alone wasn’t ideal because it only measures peaks in loudness and not the overall loudness range. As the church’s audio content consists of music and speech, Schaathun needed a tool that could balance loudness across  wide dynamic range. 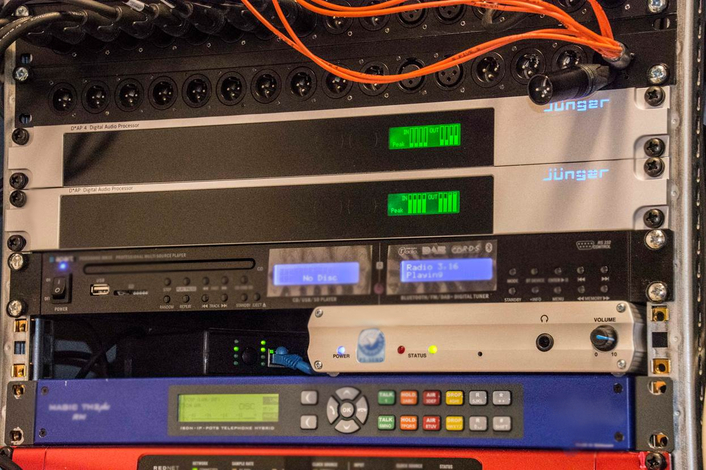 Another factor in the church’s decision to invest in Jünger Audio technology was its desire to comply with the EBU R128 loudness standard for broadcast audio, which has now been widely adopted by broadcasters in Norway. Level Magic™ features specific profiles to comply with virtually all national and international loudness regulations and requirements, including EBU R128, and therefore fitted the brief perfectly.

“We wanted a processor that could get the best possible sound to our audience,” Schaathun explains. “As we are a volunteer organization, we have limited skilled personnel to mix broadcast audio perfectly; in fact, we often just take a matrix from the FOH and mix with a pair of audience microphones. The Jünger Audio processor straightens the levels and is totally transparent; we have none of the pumping associated with peak processing.”

The Q42 media centre has one of its D*AP4 LM processors configured for two stereo signals – one set at broadcast standard -23 LUFS for recording linear TV and the other for the stream on Facebook and the internet, which is trimmed to -15 LUFS. 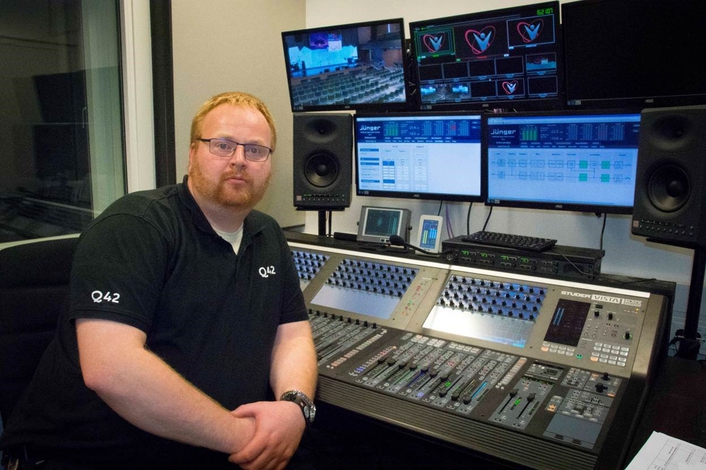 Sigurd Schaathun at the Studer Vista

“We bought one unit while the media centre was being built and used it in our makeshift studio. The reaction from our audience was very positive –our sound was pleasantly loud, yet not exhausting as many commercial channels are. When we decided to upgrade our local radio station to go national, the choice of loudness processor was simple - we bought a second D*AP4 LM unit, this time with Spectral Signature™ so that we could lightly colour our sound.”

Jünger Audio’s Spectral Signature™ dynamic EQ is a clever creative tool that offers automatic and dynamic EQ control to balance spectral differences. By analyzing incoming audio and comparing its spectrum with individually predetermined voice ‘fingerprints’, the unit can automatically apply dynamic EQ corrections to give a consistent sound. This feature is especially useful to radio broadcasters who want to create an aural identity for their radio station because the spectral sound management principles allow the unit to measure specific voice recordings and use these sound fingerprints as a reference. The Spectral Signature algorithm matches all subsequent live recordings to these fingerprints, thus creating a dedicated ‘station sound’.

The Pentecostal Church Filadelfia’s first D*AP4 LM unit was installed and configured by Jünger Audio’s Norwegian distributor Lydrommet. The simplicity of the software meant that the church could configure its second unit on its own.

“Configuration was easy and straightforward,” Schaathun says. “It was up and processing in less than ten minutes. The web interface is intuitive and adjusting parameters was very easy, yet we have a powerful tool that enables us to make our sound the best it can possibly be.”