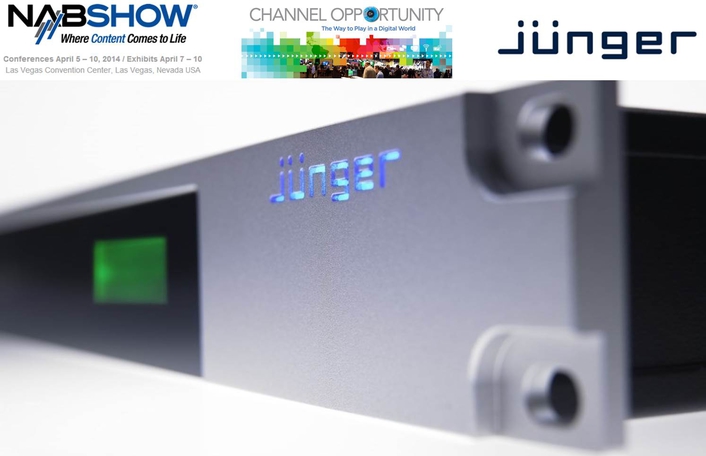 What makes this processor so special is the inclusion of Jünger Audio's proprietary Spectral Signature™ dynamic EQ – a totally new creative tool that offers automatic and dynamic EQ control to balance spectral differences. By analyzing incoming audio and comparing its spectrum with individually predetermined voice 'fingerprints', this clever unit can automatically apply dynamic EQ corrections to give a consistent sound.

For people working in TV voice over and feature film ADR, this facility is a Godsend. Imagine, for example, that you have booked an expensive and well-known actress to voice the cute little rabbit in your new children's TV series. Over the course of the recording sessions you notice that her voice sounds different at different times of the day – maybe because she is tired, or has developed a sore throat, or has had a heavy night and smoked a lot of cigarettes. If you want your rabbit to sound exactly the same every time, how do you overcome this?

Jünger Audio's D*AP4 VAP Voice Processor is the answer. On day one you record the actress' best rabbit voice, and then measure it using Spectral Signature. The voice's tonal characteristics are analyzed and recorded as a curve on a graph, which is used as a template for all future recordings. The next time your actress does her rabbit voice, the unit compares the new recording to the saved version and automatically adjusts the frequency until both voices match. Voilà! A perfect rabbit voice every time, thus saving a fortune in repeated ADR and voice over sessions, not to mention a lot of frustration on all sides.

Jünger Audio's D*AP4 VAP Voice Processor is equally interesting to radio broadcasters who want to create an aural identity for their radio stations. By using exactly the same spectral sound management principles, the unit measures specific voice recordings and then uses these sound fingerprints as a reference. The Spectral Signature algorithm matches all subsequent live recordings to these fingerprints, thus creating a dedicated 'station sound'.

"The D*AP4 VAP draws on our extensive experience with previous Voice Processing devices such as our popular VO2, but adds new tools and algorithms to create an easier and more efficient approach to voice processing with no compromise in sound quality," says Peter Pörs, CEO of Jünger Audio. "We have also included processing such as HP/LP filtering, versatile dynamics section, full parametric EQ and de-essing, and made the unit really easy to use – even for non-technical radio staff such as producers and journalists."

Jünger Audio has also provided a dedicated voice leveler combined with an auto-mixer circuit to help mixed voice programs into loudness-based broadcasting on the fly. Using the optional SDI I/O card automated voice over for SDI embedded audio becomes an attractive feature of the D*AP4 VAP.

Available as either an insert into a mixing desk or as a stand-alone unit, D*AP4 VAP offers interfaces that allow integration in existing environments via an AES insert. The unit can also be used with an optional analogue board that adds two high quality mic-preamps.

Following Dolby's decision in 2013 to discontinue its DP570 Multichannel Audio Tool, dynamics specialist Jünger Audio is now the sole company in the world that can supply a product to fill the gap. The company's D*AP8 MAP Monitoring Audio Processor is the only Loudness processor on the market capable of offering real-time metadata emulation as standard. This vital feature allows broadcast engineers in post-production, DVD and DTV facilities to check the quality of Dolby Digital AC3-encoded audio prior to transmission so that they can monitor exactly what the consumer will ultimately hear.

"Metadata emulation is very important to the broadcast community, especially those working in the USA where the ATSC has specified that all audio must be Dolby AC3 encoded prior to transmission," says Jünger Audio's CEO Peter Pörs. "Every set-top box in the USA – and in many other countries, too – has a Dolby Digital decoder installed as standard. These decoders receive audio metadata, which is the unique 'data about data' delivered by Dolby Digital bitstreams.

"Metadata is important because it ensures that television audiences at home hear their programs the way producers and content creators intended them to be. All kinds of audio parameters, including Loudness levels, are controlled this way. In countries where you can be fined if you get audio loudness wrong, it's vital that broadcasters can check exactly what consumers will hear before material leaves their facilities."

Designed for quality checking surround (5.1) and/or stereo programs, D*AP8 MAP features a built-in Dolby® Metadata generator and an optional Dolby® decoder that allows users to decode Dolby-E, Dolby-D (AC-3) and Dolby Digital plus (E-AC-3). It can also be used for live monitoring and to ensure compliance with today’s standards and regulations (ITU 1770-3, ATSC A/85 or EBU R128).

The unit comes with alarm signals that alert the operator when pre-set loudness thresholds are exceeded, and these signals can be delivered by simple GPOs and/or SNMP traps, which carry actual loudness values. Loudness measurements can be performed over a long run or over a fraction of a program, or both. These measurements can be triggered by automation systems via GPIs or via the network - or even manually by buttons on a remote panel.

Alongside loudness measurements, D*AP8 MAP also offers functionality for acoustical QA. It has eight speaker outputs that allow for A/B checking of stereo compatibility of a surround downmix through alternative speakers, as well as via L/R front speakers.

By incorporating 3G, HD and SD auto detection, D*AP8 MAP gives users the option of dealing with all 16 channels of SDI embedded audio at the same time. This means the engineer can listen to one program while permanently logging the loudness of two (5.1 +2 mode) or four (4x2 mode) programs. It is also possible to send further embedded programs to D*AP8 MAP's AES outputs to feed a third party instrument for analyzing and/or display.

For no extra cost, the D*AP8 MAP SDI board also acts as an embedder and comes with video delay to compensate for any kind of audio delay. This feature is ideal for those looking to maintain lip sync in QA suites or control rooms.

"Broadcast engineers still a need for a hardware based monitoring controller that combines loudness management and logging features with the ability to monitor Dolby®-E, Dolby®-D (AC-3) and Dolby® Digital plus (E-AC-3), as well as HE-AAC formats," Pörs explains. "Our D*AP8 MAP is the only unit on the market that can do all of this and we will be using the NAB 2014 platform to ensure that everyone knows about it."