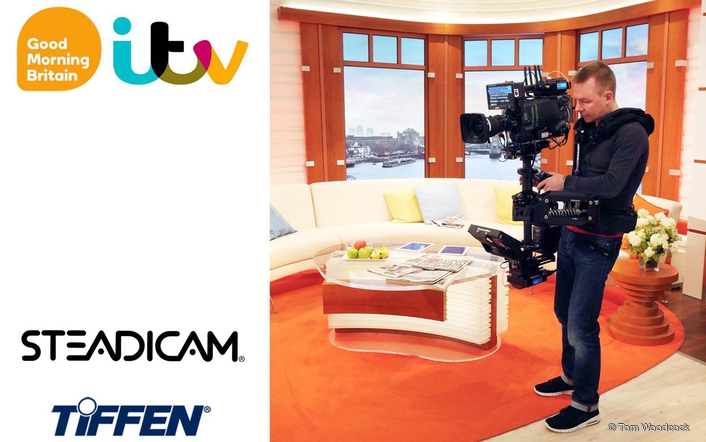 ITV Studios in London have joined the fast growing ranks of Steadicam M-1 rig users. The M-1 is the latest high-end Steadicam rig and was supplied by Tiffen International based at Pinewood Studios, London. Included with the system were the Fawcett Exovest and G70x arm, further Steadicam M-1 options.

The studios had been hiring a Steadicam Ultra2, but it became clear that it would make more sense to purchase their own system with the further advantage of having the very latest features to streamline their operation. Following their normal procurement procedures of testing three different solutions from varied manufacturers, ITV Camera Ops Jon Townsend and Tom Woodcock were tasked with sourcing a suitable camera stabilisation system for their live broadcast studio setups using Sony ENG Cameras.

Tiffen International’s Danny Hallett said: "The M-1 system ticked all of the boxes with its modularity, battery options, tilt stage, thicker post, no-tools adjustment, multiple HD lines and the feel of the G70x arm. Additionally, their time with the Ultra2 and G70 arm had already given them a positive experience."

ITV camera operator Tom Woodcock said: “This week is the first time I've had chance to properly use the M-1 and it's a joy to use. I can't fault it at all. Everything is a big improvement over what we were used to.”

Danny continued: “The choice of vest was the subject of much deliberation. Both operators were used to the Steadicam Ultra Vest, however after fitting them with it, I also loaned an Exovest for them to test over the following week or so, in a live, working environment.”

“The choice of vest is most important as the user has to feel comfortable, secure and able to carry out their job without issue or discomfort. In a live environment, the operators are in the rig for several hours at a time. The Exovest facilitates this, being an exoskeleton of rigid structure and being open to allow less contact points in the heat of the studio.”

The M-1 was purchased specifically for ITV’s ‘Good Morning Britain’, and ‘Loose Women’, with the further possibility of use on other popular daytime shows there. The monitor of choice to be used with the M-1 after tests was a Transvideo 8” XSBL 1500nit unit. A Sony HDC-1500 camera is used on the Steadicam rig in conjunction with a BOXX Meridian wireless system on ‘GMB’ and fibre on ‘Loose Women’.

Tiffen has been a leading manufacturer of photographic filters, lens accessories, software, and camera accessories for the consumer/professional imaging and the motion picture and broadcast television industries for over 75 years. Tiffen has been recognized for its product and engineering excellence, earning a Technical Achievement Award and a Scientific and Engineering Award from the Academy of Motion Picture Arts & Sciences, as well as multiple Emmy Awards.