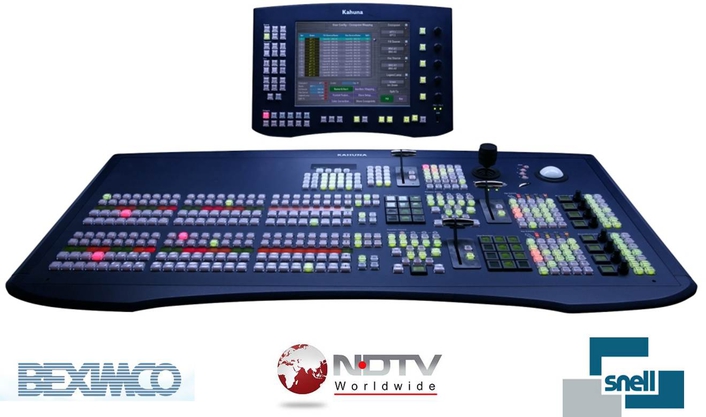 "When we designed the ITV broadcast center, we had an opportunity to install the state of the art in live production technology. We placed a high priority on systems that are highly reliable, simple to operate, and allow for a convenient upgrade to HD," said Jay Chauhan, vice president of technology at NDTV Worldwide, the media consultants for ITV.

"Kahuna was by far the best choice, with an architecture that has been field-tested in live news productions all over the world. Also, although we are some time away from launching HD operations, Kahuna's multi-format capabilities mean we'll be able to make a smooth transition from SD to HD when the time comes," said Anowarul Azim, head of technology, ITV.

Launched in August, ITV provides 24-hour news programming from its main operations center in the capital city of Bangladesh, Dhaka. ITV has installed two Kahuna switchers, one for news programs and the other to enable live-audience studio productions.

"ITV's Kahuna systems represent Snell's first installation in Bangladesh, and they are helping ITV raise the bar on quality standards for broadcasters there," said Vanessa Ching, vice president of channel marketing and communications for Asia-Pacific and the Middle East at Snell. "ITV is filling a very important niche in the Bangladesh media market as the country's first international standard 24/7 news channel."

About ITV
Independent Television (ITV) is a private 24-hour satellite news channel owned by one of Bangladesh's largest conglomerates, Beximco Group. With headquarters in Tejgaon, Dhaka, ITV obtained its broadcast license from the government of Bangladesh in March 2010.

About NDTV Worldwide
NDTV Worldwide are leading global media consultants, part of the NDTV group, and actively involved in setting up broadcast and new media infrastructure and advising clients across Asia, Africa, and the Middle East.

About Snell
Snell is a leading innovator in digital media technology, and provides broadcasters and global media companies with a comprehensive range of solutions to create, manage, and streamline the distribution of content for today's multi-screen world. Snell provides the tools necessary to transition seamlessly and cost-effectively to HDTV, stereoscopic 3D, and 3Gbps operations. Headquartered in the U.K., Snell serves more than 2,000 broadcasters, post facilities, and global media companies in more than 100 countries through its worldwide team of sales and support personnel.