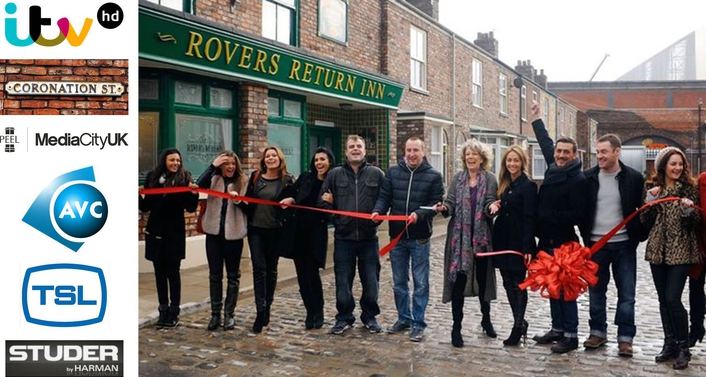 .
The relocation of the famous ITV Coronation Street lot, from Manchester’s Quay Street Studios to the 7.7-acre studio and production facility on the Trafford side of MediaCityUK, has coincided with a significant streamlining of technology. Set in a fictional town in the north of England, what has become the world's longest-running television soap opera is a British ‘institution’, having first been broadcast back in December 1960. One of the biggest upgrades in this latest development has been the transition from an analogue mixing environment to a HARMAN Studer digital platform, once ITV had learnt that its familiar analogue surface would no longer be supported.

These were duly adopted, along with Compact Stageboxes and a Soundcraft Si Compact 16 mixing desk from Studer’s sister company Soundcraft, to provide resilience. When the order was placed by TSL, the Vista 1 became the first Studer sale to an ITV facility.

Earlier, a site visit had been arranged for the show’s leading technicians, along with AVC’s lead consultant Raz Khan, at Studer’s offices in Potters Bar. Khan recalls, “Initially we evaluated the Vista 5, and had one on demo, so we could evaluate the platform, knowing that the Vista 1 would shortly be in production. From that it was written into the specification.”

Stan Robinson added, “We realised the Vista 1 would offer more or less the same facilities and also that it was compatible with Optocore fibre distribution, which we were running right across the site, linking the five production control areas.”

But aside from ease of use and intuitive Vistonics™ interface, one of the key reasons for choosing Studer was the superior mic preamp — an observation made after the technical team had carried out comparison tests with their own alternatives.

Stan Robinson admits that the Studer D21m mic input card, transformer balanced to all five stageboxes, had been a key driver, with Studer stageboxes transporting native MADI over an Optocore system.

Noted RazKhan, “This solution meant that the whole rigging set up became a lot simpler, with fibre out to the OB van to transport MADI and a ruggedized case housing the electronics. With DSP onboard, this fitted the bill perfectly for the budget and operational flexibility and redundancy.”

He added, “We didn't like the multi-layered menu of other desks — this was a lot easier. Also it needed to be intuitive because we have a small core of technical staff and a lot of freelance engineers using the system. It has been extremely well received.” Once a mic is plugged into appropriate input the source immediately appears on the relevant fader in the sound control room.

Speaking of the desk’s attributes, Mark Cochran stated, “You can access everything at the press of a button and EQ all your channel strips — and because the Studer stage box has option cards we were able to buy the highest quality mic amps.” 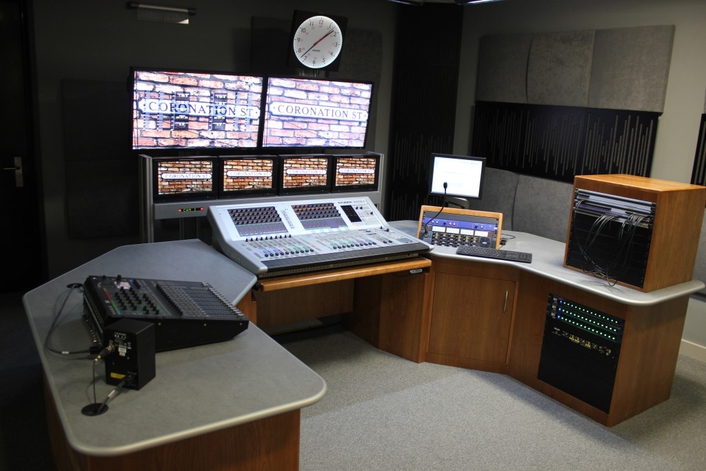 This digital format has allowed Stan Robinson to introduce a unique fibre transportation system for the signals around the site. Based on the Optocore network structure, the portable stageboxes allow signals from the studios (or anywhere else on the site) to be routed to either gallery.

Each gallery has its own stagebox, which production simply wheels to where shooting is taking place, and plugs in to the SMPTE 311M hybrid camera cable network — with 100 SMPTE sockets distributed around the site that can be patched in. Signals such as microphones, foldback, picture monitoring, video router control and talkback are automatically routed to the Studio Floor and Galleries. “In effect, the whole site becomes our studio floor,” says Stan Robinson.

Summing up he backs Mark Cochran’s endorsement of the Vista 1. “We have all been extremely happy with the decision to back the Studer platform, and it has been extremely well received.”