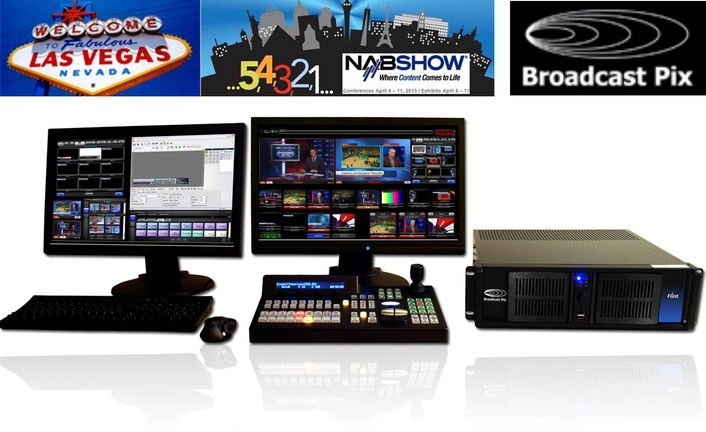 The Flint multi-format production switcher supports up to six HD/SD-SDI, HDMI, and analog cameras, plus eight channels of clips and graphics. It includes three keyers for layering, each with PiP and customizable DVE. An internal Harris Inscriber CG provides six graphic channels, while a built-in, two-channel clip server stores up to 30 hours of clips and animations in a variety of file formats, including ProRes, H.264, DNxHD and QuickTime animations.

“Broadcast Pix Flint is the professional solution that streaming video producers have been waiting for,” said Steve Ellis, Broadcast Pix CEO. “Flint brings with it a complete set of professional production tools, now extended for cloud ingest so you have everything you need to create dynamic video, whether you are producing for webcast or broadcast.”

Files from a local network or from cloud-based sources can be easily added to a program, even during a live production, with Fluent Watch-Folders. With enhanced Fluent Rapid CG, Flint can flow Twitter and RSS feeds directly to air or pre-screen them. Graphics can also be updated from local and cloud-based databases to automate multiple graphics in two channels. And graphics can be automatically updated from Daktronics and OES scoreboards.

Flint also includes the entire Broadcast Pix production control environment, so a single operator or small staff can create compelling live video. Features include patented device control for rapid access to any file; Fluent-View, a comprehensive and fully customizable multi-view; Fluent Macros, which easily executes any combination of video, files, and device moves for complex effects with the push of a button; customizable virtual sets; and control of robotic cameras, video servers, audio mixers, recorders, and other external studio devices.

Broadcast Pix Flint has a variety of control choices. Each Flint system supports two monitors and ships with a keyboard and mouse, though it can also be controlled via touch screen, iPad, or tablet. Optional control panels include a custom Fluent Keyboard, 500 panel, 1000 panel with patented PixButtons that dynamically change to show the device icon and file name on the button, and 2000 panel, a large broadcast-grade panel with expanded device control bank and dedicated Fluent Macros controls. Flint can be controlled by one operator or shared for more complex productions.