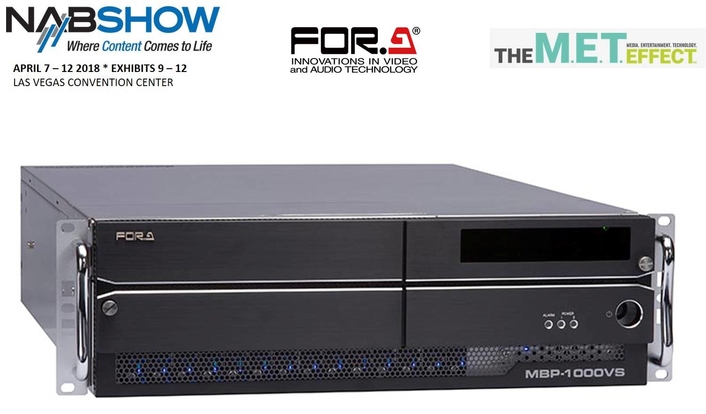 Worldwide industry-leading manufacturer FOR-A® announces that it will introduce a new 12G-SDI/IP multi-channel video server at the upcoming NAB Show. The MBP-1000VS is ideal for 4K editing environments, offering multi-input/output 4K and HD support and ingest, playout and 4K recording functionality. FOR-A will introduce the solution in booth #C5117 during NAB, which takes place April 9-12 at the Las Vegas Convention Center.

With the new FOR-A video server, users can choose from four SSD capacities with maximum 9.6TB to meet their system needs, and can add an LTO option for immediate archiving of captured 4K material or extended recording. With the LTO option, for example, the 9.6TB model MBP-1000VS unit can record approximately 31 hours in XAVC Intra Class 300. The unit also enables recording of HD material for approximately 318 hours in MPEG-2 10-bit 4:2:2 50Mbps. Offering a full range of playout and ingest system applications, the MBP-1000VS is controllable from a variety of automated production control systems and offers redundant power supply.

4K XAVC™ and MPEG-2 codecs are available with the MBP-1000VS. FOR-A is offering a range of MBP-1000VS interfaces for 12G-SDI or video over IP transmission, including 12G-SDI, 3G-SDI, and SFP+, to accommodate varying user needs for inputs/outputs and size of internal storage (SSD). The MBP-1000VS-12G, which mounts 12G-SDI in/out, supports quad-channel 4K XAVC™ codec. Standard configuration of this model provides two channels for recording and two for playback, and it can be configured with up to four channels for recording and four for playback. The MBP-1000VS-IP includes a SFP+ port for 10 Gbps video over IP I/O. It supports up to dual-channel 4K XVAC™ codecs and can switch channels from encoding to decoding as needed. Supported formats for video over IP include SMPTE 2022-6/7 (TICO) and NMI (LLVC). This model also offers 3G-SDI output capabilities for monitoring. The MBP-1000VS series also includes an HD supporting model, which supports MPEG-2 codec and can be configured with up to eight channels for inputs/outputs.