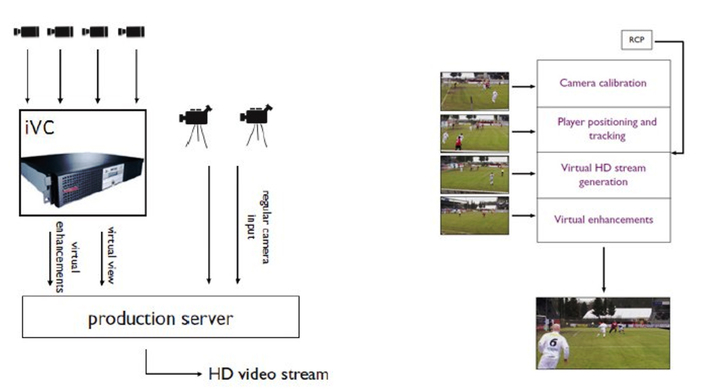 Imec Virtual Camera turns the input from fixed cameras into a 3D space where the Director or cameraman has the total freedom to choose any angle or distance to the action. iVC gives the Director a flying camera that he can easily steer anywhere he wants to find the ultimate angle. iVC is also unique because it allows real-time advanced image manipulation on still shots, slow motion and even on live video feed. Moreover, iVC developers paid particular attention to cost effectiveness and ease of use. iVC can be easily integrated into any existing production pipeline. The video input comes from standard HD-IP cameras, without compromising the quality of the output. As HD-IP cameras cost only a fraction of conventional outside broadcasting cameras, the production cost is dramatically reduced. And, iVC is handled via a user-friendly remote control panel comparable to that of a regular boom camera or spider cam, enabling the Director or cameraman a straightforward manipulation of the virtual camera.

With iVC, you can experience a personalized rock concert, watching it from the best seat in the stadium

Imec Virtual Camera brings many new and exciting possibilities in sports, concerts or performance broadcasting. For example, with iVC, you can experience a personalized rock concert, watching it from the best seat in the stadium, or you could zoom in on the feet of the ballet dancer when they are brought together for a landing. You could follow the curve of the ball when a quarterback throws a 40 yard pass, or sit on the striker’s shoulder when he is getting ready to score his legendary goal, ... Unlike other digital vision technologies, where the constraints of the specific sport have to be taken into account during development, iVC works instantly with any sports that takes place on a flat surface (tennis, football, soccer, volleyball, basketball, baseball, ...). Moreover, iVC’s advanced image manipulation also features digital signage, player tracking, instant off-side analysis, ...

Outside Broadcast was part of the imec Virtual Camera project

Imec Virtual Camera is a fully operational prototype that is now ready for licensing. Johan De Geyter, department director digital components at imec: “Our global launch today at the NAB Show, shows our confidence that with iVC, we have the technology that will revolutionize the way we capture action. Timo Koch, Managing Director at Outside Broadcast, one of Europe’s leading outside broadcasting companies and imec’s partner in the development of iVC: “In our permanent search for new technologies to incorporate in our offering, we are proud to have been part of the imec Virtual Camera project, which can become a revolutionary product in the future professional broadcasting market. iVC will allow us to automate some standard camera positions and –movements and could replace cameras that are only used for specific replay angles. iVC is the ultimate tool to offer angles that have never been shown before. These are just a few examples of how iVC can enrich the live-coverage of different sports- and music events. On another level, iVC is the ideal tool to generate the perfect stereoscopic image the broadcasting industry actually is looking for. ”

Imec performs world-leading research in nano-electronics. Imec leverages its scientific knowledge with the innovative power of its global partnerships in ICT, healthcare and energy. Imec delivers industry-relevant technology solutions. In a unique high-tech environment, its international top talent is committed to providing the building blocks for a better life in a sustainable society. Imec is headquartered in Leuven, Belgium, and has offices in Belgium, the Netherlands, Taiwan, US, China and Japan. Its staff of more than 1,750 people includes over 550 industrial residents and guest researchers. In 2008, imec's revenue (P&L) was 270 million euro.