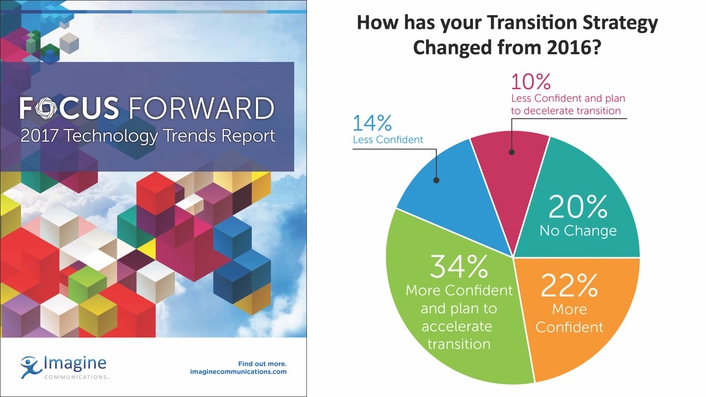 Imagine Communications, empowering the media and entertainment industry through transformative innovation, released the findings of its third-annual media & entertainment industry survey. The comprehensive document, Focus Forward: 2017 Media & Entertainment Industry Report, explores the tightening and dynamic relationship between technology innovation and the ability of media companies to generate additional revenue and improve competitive positioning through new business models. Key findings include a growing familiarity with microservices and Cloud-Native applications, increased comfortability with next-generation technologies and a resulting acceleration of plans to transition operations to IP-based environments, including the cloud.

“The hundreds of media professionals who participated in the survey provide an invaluable insider’s assessment of the future direction of the media industry, from both a technology and commercial viewpoint,” said Imagine Communications CEO Charlie Vogt. “No other creative medium is more dependent on technology for its overall success than television and video production. This year’s survey explores the bonds of that relationship from the perspective of the men and women who are directly involved in creating, distributing and monetizing video information and entertainment.” 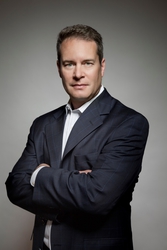 A new development in this year’s survey, validated by the wide-scale acceptance of next-gen architectures at the 2017 NAB Show and multiple real-world deployments, is that much of the uncertainty surrounding the future technology landscape has dissipated. Most media companies now recognize the migration of operations from purpose-built hardware to software-driven environments based on commercial off-the-shelf (COTS) platforms as a competitive and economic imperative. It’s now widely accepted that only IT-based infrastructures are capable of delivering the agility and versatility needed to speed the velocity of new service introductions and futureproof facilities against disruptive and frequent technology refreshes.

When asked how their attitudes toward transitioning their operations, including live production, to an IP-based environment had changed over the past year, more than half of all respondents to the 2017 survey indicated an increased confidence in the suitability of IP-based environments to host even-the-most-demanding operations. In addition, 34% of all respondents say they are now planning to accelerate their transition to IP from where they were a year ago.

The report speculates that a growing number of successful real-world, next-gen deployments; the availability of testing facilities, including the recently launched Imagine Communications Labs (IC Labs); and progress toward widespread interoperability resulting from the actions of the Alliance for IP Media Solutions (AIMS) trade association all played roles in boosting the comfort level associated with a transition to standard computing equipment.

Other key findings of the report include:

Presented in two sections, Technology and Business, the report is designed to provide a first-hand account of the direction media industry professionals are moving on the technology front and how they believe the ongoing injection of innovation into their workflows will influence the commercial direction of the media industry. Findings and analysis are illustrated through more than 25 informative charts and graphics.

A strategic planning guide for the second half of 2017 and beyond, the report can be downloaded here.

About Imagine Communications
Imagine Communications empowers the media and entertainment industry through transformative innovation. Broadcasters, networks, video service providers and enterprises around the world rely on our optimized, futureproof, multiscreen video and revenue enablement solutions every day to support their mission-critical operations. Today, nearly half of the world’s video channels traverse our products, and our software solutions drive close to a third of global ad revenue. Through continuous innovation we are delivering the most advanced IP, cloud-enabled, software-defined network and workflow solutions in the industry.