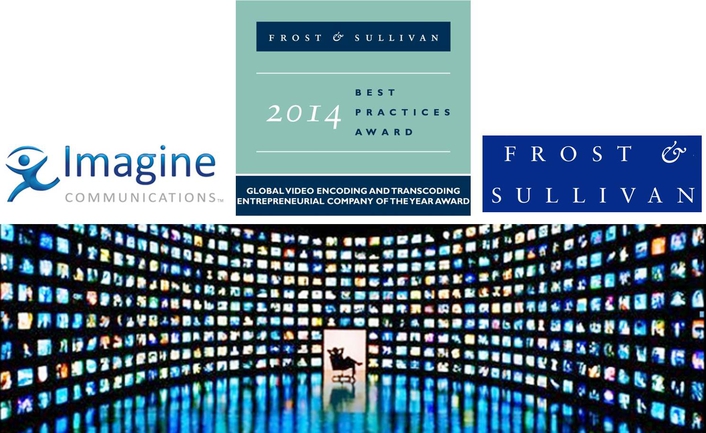 “We are honored to be recognized with this award and view it as an affirmation of our progress in leading the industry toward an open standards and software-centric video processing model,” said Charlie Vogt, CEO of Imagine Communications. “One of our primary objectives is empowering our customers to migrate to an IP future based on open standards and interoperable solutions, and do so while maximizing their investments in existing infrastructure and workflows. It is particularly rewarding that Frost & Sullivan’s research validates our vision, and this prestigious award recognizes the considerable work by our employees around the world to make it a reality.”

The award is the second honor Imagine Communications has received in 2015. The company was also recognized with a Technology and Engineering Emmy® Award at the 66th Annual Technology & Engineering Emmy Awards for breakthroughs in the “Standardization and Productization of JPEG200 (J2K) Interoperability” by the National Academy of Television Arts & Sciences.

According to Frost & Sullivan, the video creation and delivery ecosystem is changing at every stage of the workflow. In transcoding, an alphabet soup of video compression acronyms has given way to the uniformity of AVC, and the challenge has now shifted to maximizing throughput, density and agility, while minimizing total cost of ownership. Software-based and software-defined products, particularly those based in the cloud, have the potential to solve the industry’s need for cost-effective, agile and scalable workflow platforms.

“Imagine Communications was quick to recognize that while the broadcast industry needs to transition to IP, it is extremely difficult for companies to implement this migration in wholesale fashion,” said Avni Rambhia, industry principal with Frost & Sullivan.  “There is a need for evolutionary rather than revolutionary approach, and Imagine Communications’ refreshed line of products reflects the ability to empower this type of gradual migration.

“By taking the stand of supporting open standards and interoperable offerings, the company may in fact be laying the foundations for a much-needed revitalization of the entire digital media industry, which has begun to stagnate under the constant onslaught of customer churn, falling prices, commoditization and technology flux.”