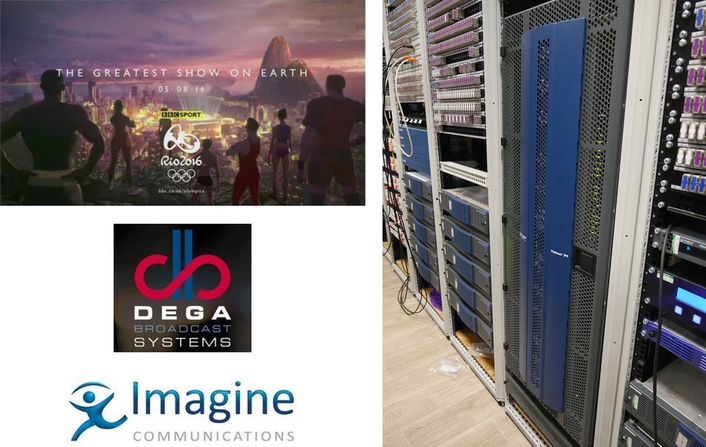 Imagine Communications, empowering the media and entertainment industry through transformative innovation, has supplied Dega Broadcast Systems with a fully configured Platinum™ IP3 router.  It will serve as the central point of control for the on-site facilities Dega is building for the BBC in Rio de Janeiro for the summer games. Dega, a UK-based systems integration specialist, is using additional infrastructure products from Imagine Communications, including converters and distribution amplifiers, running to about 30 frames of distribution equipment, plus test and measurement equipment.

“It is the scale of the project that makes it an interesting challenge,” added John Cleaver, director of Dega Broadcast Systems. “We are building facilities at the International Broadcasting Centre in Rio, and linking it to the studios at Copacabana. There are 45 feeds coming in from the host broadcaster and 30 unilateral feeds plus the studio; the output is to two broadcast networks and to 24 online and interactive streams, effectively a channel per sport. We built this for the London games four years ago, and the BBC has entrusted us to do the same for them in Brazil.”

Once the main event is finished in Rio, much of the equipment will be used for the companion international event for athletes with physical disabilities.

Given the complexity of the set-up, including track-swapping and dealing with multiple audio streams, as well as all the routing requirements, a Platinum IP3 router from Imagine Communications was the obvious choice. It also allows for on-board processing and incorporates Platinum SX Pro™ multiviewers, making the overall installation more compact and cost-efficient than alternatives.

“The Platinum was the best package for us and for the production,” Cleaver explained. “The number of circuits, the need to shuffle the audio tracks to meet the delivery requirements, synchronization across so many inputs and outputs: it meets the functionality we need, and it represents good value for the money.”

Pablo Gargiulo, Chief Customer Officer, Imagine Communications, added, “This is both a very complex broadcast installation and a mission-critical one. You never get a second chance at capturing a great sporting moment. We have layered in resilience and redundancy alongside rich functionality in our Platinum series routers, ensuring that the huge and demanding sports audience never misses a moment of the action.”