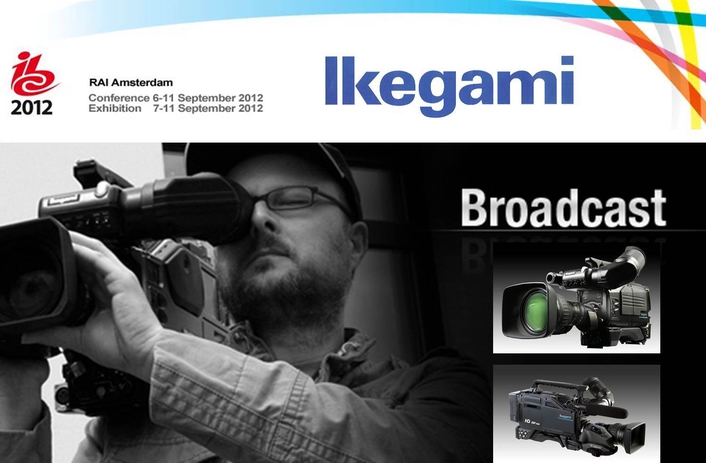 Flexibility for the Future " Unicam "
Leading off Ikegami's IBC 2012 exhibit was the new Unicam HD camera line. These multi format HD cameras – which also provide 3G-SDI 1080/50p performance – include the new HDK-97A 16-bit portable HD companion-camera that supports not only 1080i/720p, but also 3G signals such as 1080/50p 4:2:2 and 1080/50i 4:4:4. The HDK-97A employs advanced new progressive AIT CCD imagers and an all-new digital video processing system for superior picture detail and accurate rendition of color gradations. Delivering a choice of 1080/50p 4:2:2 or 1080/50i 4:4:4 color sampling, the new high bit-depth HDK-97A is designed for traditional-style multi-camera production applications. A docking-style camera, the new HDK-97A also features a 3G fiber-transmission system from the camera head to its (also new) CCU. Transmission options include an HD-SDI QTV signal for teleprompter (or vanity/program monitor) use and an HD-SDI "trunk channel" that allows for connection of a second camera that doesn't have its own built-in fiber transmission system (such as a POV camera, including one paired with the HDK-97A in a stereoscopic 3-D application).

The HDK-97A camera operates with new and existing CCUs, including the 3G CCU-970, the 3G half-rack BS-97, and the new low-profile BSF-55 fiber base station. The HDK-97A allows easy change-over between fiber and triax adaptors, with Ikegami's CCU-970M capable of supporting both cable types with simple front-panel switch selection. 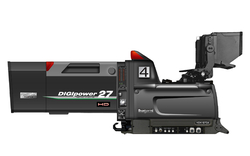 The HDK-970A is the full studio version of the HDK-97A, featuring the ruggedness and ease-of-service long associated with full studio-body cameras. Two hundred watts of utility power is available for prompter powering, and the studio versions includes new styling and coordinated color with their portable companions. 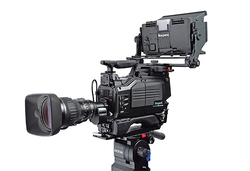 The new HDK-55 is the most affordable member of the Unicam HD camera series, and uses 1080i 2.3 megapixels AIT CCDs. New features include Quick EZ Focus and chromatic aberration correction. Like the other portable cameras in the Unicam HD series, the HDK-55 is a compact low-profile camera head with docking adaptor for fiber or triax cable use.

Providing multi format HD convenience and easing the transition from SD to HD, Ikegami's new BSF-55 compact, economical fiber base station is just 1.5 rack units in height and weighs only 16 lbs., yet it supports SMPTE cable distances up to 2 km (1.2 miles). Including both up- and down-converters, the BSF-55 readily supports the transition from SDTV to HDTV with inputs and outputs in both formats as a standard feature. The BSF-55 operates with the full range of HDK-series camera heads, supporting both 1080i and 720p in either 59.94Hz or 50Hz.

As the newest member of the Unicam family Ikegami is proud to present the wireless adapter WA-97. Characterized by its extremely low delay of 48 ms in total, this adapter is applicable on the HDK-97A and is capable of a full remote control. In addition a new base station with 2- and 6-times diversity is available.

The Hi-Motion II cameras provided stunning ultra-slow-motion coverage of the 2012 UEFA European Football Championship and are also used at the 2012 Summer Olympics. 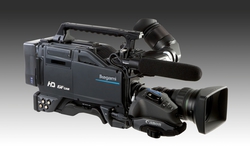 GFCam™ camcorder
Ikegami's groundbreaking development of Emmy®-winning tapeless camcorder technology is seen in the GFCam™ HDS-V10 HD camcorder for workflow-efficient tapeless ENG. Part of Ikegami's GFSeries product line, the HDS-V10 HD camcorder employs three 2/3-inch CCD sensors (selectable between native 1080i and native 720p) and uses MPEG-2 compression and the MXF file format for an open-codec HD/SD recording architecture compatible with Avid and other leading editing systems. The HDS-V10 uses GFPak Flash-RAM media at up to 128 GB capacity with a convenient USB port for instant access from laptop or desktop editing systems. Users can also choose Ikegami's CF Adaptor loaded with off-the-shelf CompactFlash Type I media. The many advanced features of the HDS-V10 HD include Bluetooth for instant export of thumbnail clips directly to laptops for fast logging, metadata insertion, and other workflow advantages.

Especially for gyro platform use in helicopters and of course other applications, Ikegami offers the HDL-F30, a two-piece HD camera with separate optics, essentially a direct replacement for the prior generation SDTV separate optics camera.