Ikegami and ARRI Marriage of Technologies 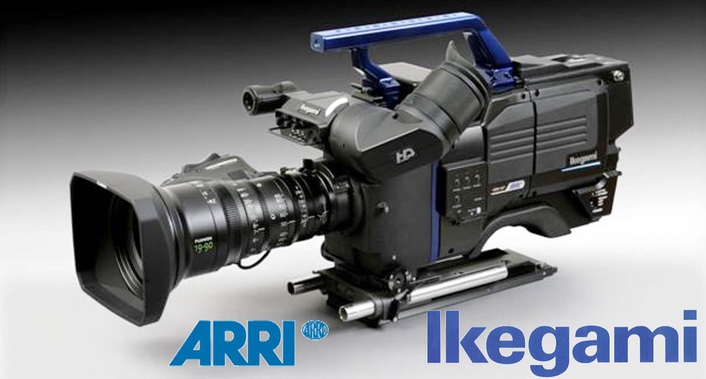 A powerful marriage of technology between two recognized industry leaders, the HDK-97ARRI is a broadcast-style production camera with digital cinema characteristics. In a significant development, the HDK-97ARRI makes it possible to employ a large format sensor in multiple camera operation. The result is a “best of both worlds” image acquisition system ideal for use in multi-camera studio and field applications, including conventional broadcast camera operation and classic video operator control of multiple cameras.

Broadcasters and content producers will benefit from the unprecedented combination of features in the HDK-97ARRI, jointly developed by the highly experienced engineering teams of Ikegami and ARRI. Centered around ARRI’s Super 35mm CMOS sensor with its associated support circuitry, the system provides such cinematic qualities as natural color rendering, exceptional dynamic range and progressive framerates like 23.98p. Meanwhile, broadcast-grade distribution is enabled with the latest in Ikegami technology, via fiber transmission using up to 2 km SMPTE hybrid fiber/copper camera cable.

QUOTE FROM ARRI
“ARRI is proud to be collaborating with Ikegami, a company that has been a genuine leader in the field of professional television imaging since the earliest days of video,” says Franz Kraus, Managing Director, ARRI. “The collaboration represents a great opportunity for both partners; but more importantly, combining the high dynamic range and cinematic aesthetic of our 35 mm sensor with a docking-style broadcast camera system will create new opportunities for customers. With the best technologies from both worlds now available to them, we look forward to seeing how customers increase the production value of their broadcast output by using this exciting new camera.”

QUOTE FROM IKEGAMI
“Ikegami is very honored to collaborate with ARRI, a magnificent manufacturer with a deep history,” says Naoki Kashimura, Director of the board, Product Strategy and Marketing, Ikegami. “There are many common traits between ARRI and Ikegami – including our outlook and approaches to manufacturing – that make for great synergies within our collaboration. This camera achieves the best marriage of ARRI’s refined front-end, in which the highest levels of know-how for the digital cinema market has been attained, and Ikegami’s back-end, which is known throughout the broadcast market for its real time video processing technology. We strongly believe that the HDK-97ARRI is a top-end camera system, one which will be recognized as groundbreaking throughout the world of broadcasting.”