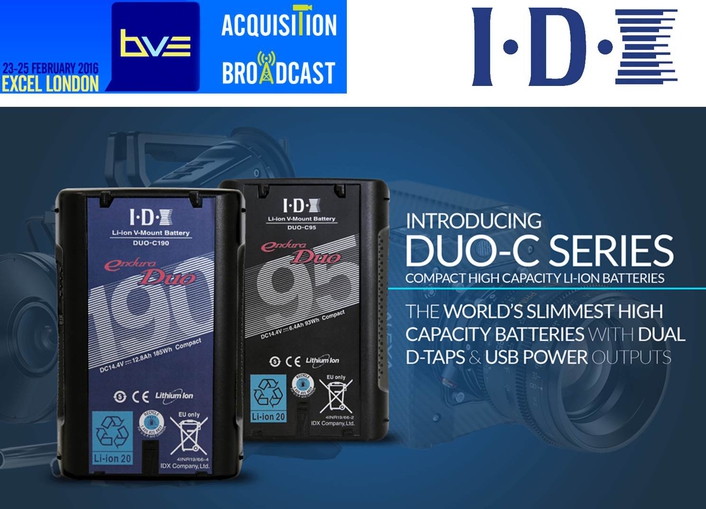 More energy density is the holy grail of battery manufacturers. The DUO-C95 packs 93Wh capacity into a slim form factor weighing just 1.3 lbs. For those needing even longer run times, the DUO-C190 weighs just 2.3 lbs. with a capacity of 185Wh and supports a continuous load of 11A/120W, ideal for high power demanding LED lights and digital cinema camera setups.

In common with the other IDX DUO batteries, these batteries are feature rich with 2x   D-Tap and a USB power output to power ancillaries that are common on today’s camera systems. Always innovators, IDX have given one of the D-Taps a D.C. in pin. This ‘D-Tap Advanced’ socket will permit the battery to be charged from a low cost and lightweight travel charger that IDX will introduce at NAB 2016.

Quality is assured through the partnership with Panasonic Sanyo who work closely with IDX in the design of the battery protection circuitry and supply the Lithium Ion cells best suited for demanding broadcast, video, and digital cinema applications. Continuing the trend seen in the CUE battery range the DUO Compact batteries are designed to meet stringent PSE safety regulations. Currently Japanese specific but likely to be adopted worldwide, the regulations demand that individual Lithium Ion cells are isolated from each other within the battery in a honeycomb like structure. This structure can be seen on the IDX stand G20 at the BVE2016 show.

About IDX
With over 25 years of expertise in battery manufacturing, IDX has maintained its position as the global leader of Li-ion battery systems for the professional audio, broadcast, cinema, and video industries. Pioneering the use of Li-ion technology, IDX has fundamentally changed the way professional equipment is powered today. Established in 1989, IDX has made a name for itself  with the award winning PROSeries NP-Style and ENDURA™ V-Mount™ battery systems and the groundbreaking CAM~WAVE™ wireless transmission line. IDX continually looks forward to innovate for the future and meet the ever-changing demands and challenges of the professional audio, broadcast, cinema, and video industries. The company’s global headquarters is located in Japan with distribution and support branches in Asia, Europe, North America and South America.