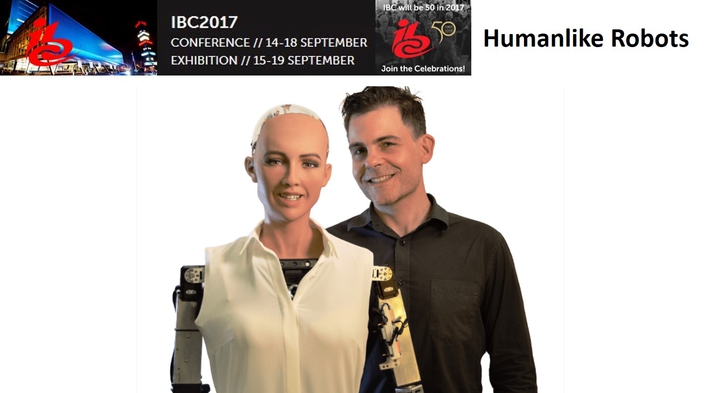 IBC2017 is honoured to welcome two very special guests in the form of Sophia and Professor Einstein™, the expressive, intelligent and uncannily humanlike robots designed and created by Dr David Hanson, Ph.D, Founder and CEO of Hanson Robotics. Together with Dr Hanson, they will appear in the Tech Talks Keynote: The Future with Robots that Are Like Us on Sunday 17 September, as part of a day-long strand of discussions that will examine accelerating trends and technologies of the future.

Dr. David Hanson has built a worldwide reputation for creating the world’s most humanlike, empathetic robots, endowed with remarkable expressiveness, aesthetics and interactivity. He has produced many renowned, one-of-a-kind robot characters that have received massive media and public acclaim.

Sophia is Hanson Robotics’ latest and most advanced robot, with strikingly human expressions and evolving intelligence that enables her to converse and build relationships.

Professor Einstein is the first personal robot from Hanson Robotics. Dr Hanson teamed up with Andy Rifkin, a toy inventor with over 40 years’ experience, to develop a robot that would honour Albert Einstein’s character and unique teaching style of explaining complex topics in a way that everyone could understand. Professor Einstein plays educational games, shares scientific facts and answers questions on a range of topics.

At IBC Sophia, Professor Einstein and Dr Hanson will discuss how robotics and artificial intelligence are set to become a prevalent part of people’s lives, with robots that can learn creativity, empathy and compassion.

Michael Crimp, CEO, IBC, said, “Our Sunday series of Tech Talks offers a privileged opportunity to glimpse the technologies of the future “We’re incredibly excited to meet Dr Hanson, Sophia and Professor Einstein at IBC to discuss the future of robotics technology and artificial intelligence, as well as the possibilities they have to enhance human life.”

IBC2017 offers insights into future technologies set to transform the user experience
VR and AR examined from all angles at IBC2017
Q & A with Michael Crimp, CEO, IBC