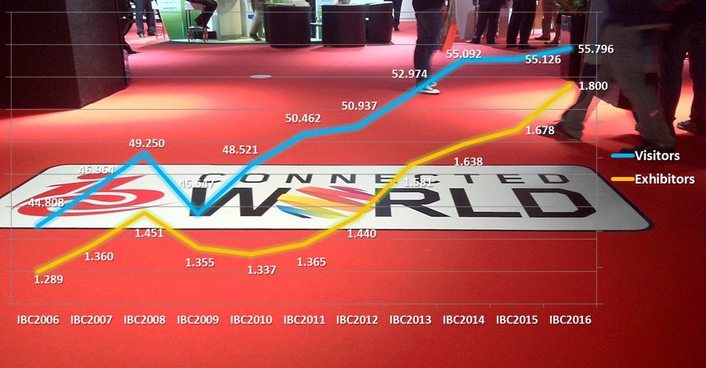 From a record attendance to the first standing ovation for an award winner, IBC2016 was a great success by any measure. In the opening keynote session Dominique Delport of Havas Media warned the audience that “the 50 year party is over”, but underlying IBC’s global theme of transformation, he – and every delegate and visitor – found much to be optimistic about.

The headline attendance figure for IBC2016 was 55,796 over the six days of the conference and exhibition. This is the number of attendees not registrations – the people who were actually on site, who came from more than 160 countries.

“IBC really is the only forum that attracts a global audience, the most comprehensive exhibition, and the best thought-leaders to spark the debate,” said Michael Crimp, CEO of IBC. “This year they included Sir Martin Sorrell on the global future for advertising, Erik Huggers on online broadcasting, and Mr Ang Lee on the new realism that the latest technology brings movie-makers.”

“But IBC, above all else, is about bringing people together to share knowledge and to do business,” Crimp added. “It is clear, from the buzz around the whole show, that this has been a great year.”

The exhibition featured over 1,800 exhibitors, including 249 companies at their first IBC. One important addition to the feature areas in the exhibition was the IBC IP Interoperability Zone, an initiative to push forward open standards in new connectivity. Supported by AIMS and the IABM and working with AES, AMWA, the EBU, SMPTE and VSF, IBC created a dedicated exhibit which demonstrated verified technical progress in IP interoperability and featured the award-winning VRT-EBU LiveIP studio which was used for IBCTV’s production at this year’s show.

Reflecting the state of the industry, the conference took transformation as its theme. That was also reflected in the IBC Leaders’ Summit, the behind-closed-doors programme for 150 C-level Executives. The conference programme was reorganised this year to provide a clearer, more readily navigated structure and a focus on the content value chain. Across the five days, 435 speakers took part in more than 100 sessions.

One of the most popular sessions featured Ang Lee talking about – and demonstrating – how he has employed remarkable technology to create a strong sense of engagement in his new movie, Billy Lynn’s Long Halftime Walk. Specially created for IBC, the clip from the forthcoming movie was projected at 120 frames per second in 4K 3D, using Christie’s 6P laser projection and Dolby Atmos. He was also the recipient this year of IBC’s highest award, the International Honour for Excellence, and his charming, funny, self-deprecating acceptance speech earned him a standing ovation from the packed Auditorium.

The audience also saw the most unusual acceptance speech yet at an IBC Awards Ceremony. NASA received the Judges’ Prize, and IBC was thanked in a special message from astronaut Kate Rubins in the International Space Station.

The Auditorium was once again converted into the IBC Big Screen, and as well as the awards and Ang Lee’s keynote presentation, it was also the venue for two hugely popular movie screenings, both using Dolby Vision HDR and Dolby Atmos. The Jungle Book in 3D courtesy of our friends at the Walt Disney Company and the harrowing 19th century saga The Revenant kindly provided by 20th Century Fox.

“The continuing success of IBC is down to the hard work of a lot of people, staging an event that is relevant and engaging across the whole of our transforming industry,” concluded Michael Crimp. “We continue to evolve, and I am confident that next year’s IBC – our 50th anniversary edition – will be even better. I look forward to welcoming you back to Amsterdam, 14 to 19 September 2017.”