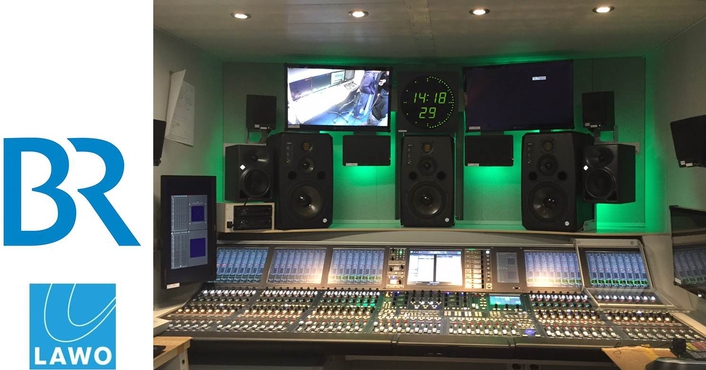 .
Having updated the audio systems in its Ü2 and Ü3 radio OB trucks back in 2013, Bavarian public broadcaster Bayerischer Rundfunk (BR) operates integrated systems of Lawo production and on-air products. At its Nuremberg Regional Studio, BR is now replacing another two aged OB vans (Ü1 and Ü2) with new vehicles that have a largely identical configuration.

Mixes of all kinds are handled by Lawo mc²66 consoles, providing the recording, sources and TB signals needed for large-scale live events using a sapphire mastercard-equipped DALLIS router frame. The different processes are visualized and operated by way of a multi-page graphical user interface with touchscreen operation. This is where the VisTool software provided by Lawo’s radio tools portfolio comes into its own. For the playout – also in multichannel mode – it is possible to dock a sapphire console at any time.

Additionally, this approach enables BR to operate with a streamlined personnel structure, using a standard staff of two to three persons. For large productions however, five workplaces are available, and the driver’s cabin can also be used.

Multichannel recordings can be visualized in groups of 64 channels on the metering pages using the VisTool. The labels assigned at an mc²66 console are transferred via the protocol level, significantly speeding up the identification of any error sources.

Signal processing and level display of all TB and playback sources – incoming and outgoing – is also managed by the mc²66/sapphire/VisTool combination, using the DSP capability of the mastercard. As VisTool also allows the realization of faders on the graphical surface, spontaneous adjustments can also be made – a particularly important consideration in live broadcast.

All error messages within the overall system (overheating, power supply failure, line disconnect etc.) together with the modes of the TB and playback channels are displayed as clear text on the graphical user interface. In case of misoperation, it is possible to assume control.

The integration of Ember+ protocol in the VisTool environment allows control and signaling of connected audio codecs. With future extension of the multi-media workplaces using devices from the Lawo Video Line, e.g. V__pro8, functions such as Video-follow-Audio can be configured without much effort, which allows, for example, the streaming mode or the operation of webcams without additional staff.

The main contractor responsible for equipping both vehicles was sonoVTS – the contract was awarded in October 2013 with the OB vans to be delivered during February and March 2015. In spite of additional work facilities in video and online, they succeeded in keeping the overall length under 10 metres at a height of 3.5 metres and a weight of about 16 tons.

From the earlier five OB vans, there are now 12 radio OB vans in use by the public broadcast union ARD using Lawo technology.