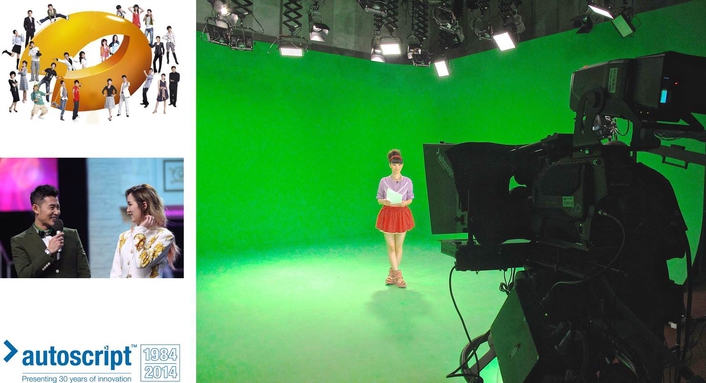 One E.P.I.C. system was an upgrade to the existing 15 inch Autoscript prompter
Autoscript, part of Vitec Videocom, a Vitec Group company, today announced Hunan TV has purchased two lightweight E.P.I.C. (Enhanced Prompting Information Centre) units. The units were purchased as part of a newsroom upgrade at the station’s headquarters in Changsha to complement existing Litepanels LEDs.

Hunan TV is one of the top three television networks in China and delivers a broad range of programming to most of the domestic market using cable and satellite. Territories covered include Macau, Hong Kong and Taiwan. The broadcaster also reaches ex-pats in overseas markets including North America through its Hunan STV World brand.

One E.P.I.C. system was an upgrade to the existing 15 inch Autoscript prompter that has been in use in the studio over the course of the past ten years, while the other was for a new camera.

Zhao Guoqiang, vice director of the Hunan TV news centre, explains: “Our technicians and the talent trust the Vitec Videocom brand, so we were keen to keep using Autoscript products when we upgraded the newsroom.

“We have started using virtual reality (VR) more regularly in our news programming so it made sense to update the kit in the studio to help talent work with these elements more easily. We saw E.P.I.C. at the last BIRTV exhibition and were immediately impressed by how it had been developed with VR in mind – for example the option to convert the video monitor to a mirror proves incredibly useful here. When the time came to modernise the studio, E.P.I.C. was at the top of our wish list.”

Commenting on the deployment, Simon Clark, business development manager – prompters (EMEA and Asia), Autoscript, says: “It’s always pleasing to see customers come back to Autoscript when it’s time for an upgrade. We’re extremely proud of E.P.I.C. and are confident it remains the most advanced prompter available. As such, it is well-suited to the type of ambitious news programming produced in the studio. We look forward to another decade of success with Hunan TV.”

Jerry Du, chief representative, Vitec Videocom, China Office says: “We are very excited to support Hunan TV in its effort to provide high-quality services to its customers. Thanks to our comprehensive product portfolio and price-performance advantage we deliver, we distinguished ourselves from the competition.”

About Autoscript
Autoscript is the world leader in the prompting industry, providing professional teleprompting equipment to broadcasters across the globe. Established in the UK in 1984, with headquarters in the UK and the US, Autoscript designs and builds innovative hardware and software to meet real world needs and continually enhance the production process. A prime example of this is Autoscript’s latest product, the E.P.I.C. (Enhanced Prompting Information Centre), an all-in-one prompter display and on-air talent monitor that vastly simplifies studio equipment, reduces power consumption and enables easier location prompting. Autoscript is a member of the Vitec Group.