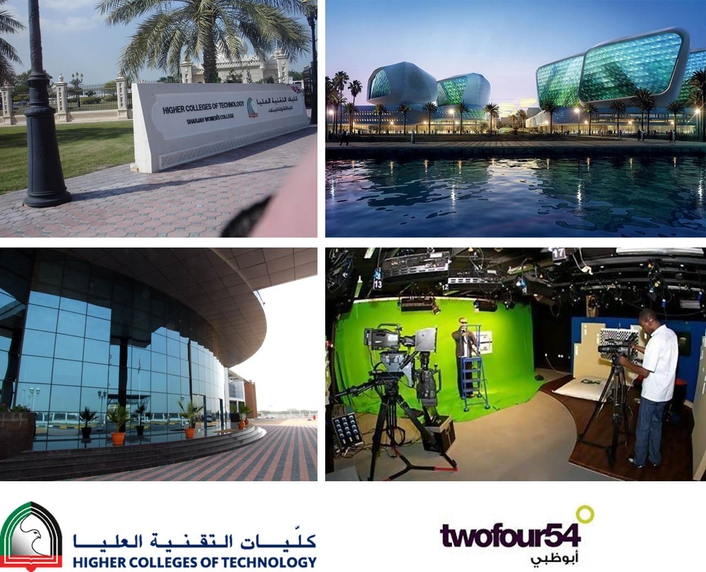 The parties will also collaborate on major HCT events such as the ‘Festival of Thinkers’ and ‘Education without Borders’
Higher Colleges of Technology (HCT) has joined forces with Abu Dhabi media and entertainment hub twofour54 to provide HCT students with opportunities to develop skills and careers in the local media industry, with the recent signing of a Memorandum of Agreement.

The agreement was signed by Dr Tayeb Kamali, Vice Chancellor of the Higher Colleges of Technology and Mr Tony Orsten, CEO of twofour54. As part of the parties’ commitment to developing the media skills of HCT students they will work closely to establish a dedicated twofour54 lab at the HCT Abu Dhabi Men’s College campus.

The parties will also collaborate on major HCT events such as the ‘Festival of Thinkers’ and ‘Education without Borders’ international conferences, and twofour54 will provide internship opportunities for HCT students with twofour54 and its partner community. Furthermore, twofour54 will run a series of workshops and industry development events at the HCT campuses and at the twofour54 facilities.

HCT Vice Chancellor Dr Tayeb Kamali said the innovative lab would greatly assist applied media students to hone their skills. “The Higher Colleges of Technology is proud to provide cutting-edge, student-centred and relevant technologies and education practices, such as this lab, to prepare its graduates for in-demand careers in this increasingly globalised economy,” Dr Kamali said.

“With this partnership we are developing graduates with the knowledge, skills and confidence to contribute effectively for the 21st Century and to reach their full potential,” Dr Kamali added.

twofour54 CEO Tony Orsten said the proposed media lab was about forming a creative and professional partnership with HCT to engage local youth in the burgeoning local media industry. “We want to connect with the youth and ignite their passion for media. This agreement reflects our commitment to developing world class Arabic media and entertainment content by stimulating local talent and creating professional opportunities for them here,” Mr Orsten said.

“We are delighted to be working with HCT, combining our joint expertise and skills, to develop Emirati students for a successful career in the media industry.”

As part of the agreement, twofour54 will become a founding member of the HCT Foundation’s HCT 100, which will enable it to be involved in a number of future HCT events.

twofour54's vision is to enable the development of world class Arabic media and entertainment content, by Arabs for Arabs, and to position Abu Dhabi as a regional centre of excellence in content creation across all media platforms including film, broadcast, music, digital media, events, gaming and publishing.

twofour54 has already attracted over 130 companies, which are now based at the Abu Dhabi campus.  These include several of the region’s and world’s largest and most influential content creation companies, including Ubisoft, Sky News Arabia, Fox Intl Channels, CNN, BBC, Financial Times, Viacom, C Sky Pictures, Thomson Reuters, Cartoon Network, PyraMedia, Bloomberg, Blink Studios, Charisma, VERITAS Films, Tahadi and Jawaker.  Each of these partners has recognised the vast opportunity that the Arab world represents for growth, and has committed significant investment and resources to business initiatives that are led out of twofour54.

The name twofour54 is taken from Abu Dhabi’s geographical coordinates, which are latitude 24 north, longitude 54 east. This name was chosen to symbolise Abu Dhabi’s strategic position within MENA, and its central role in driving the development of the region’s growing media and entertainment industries.