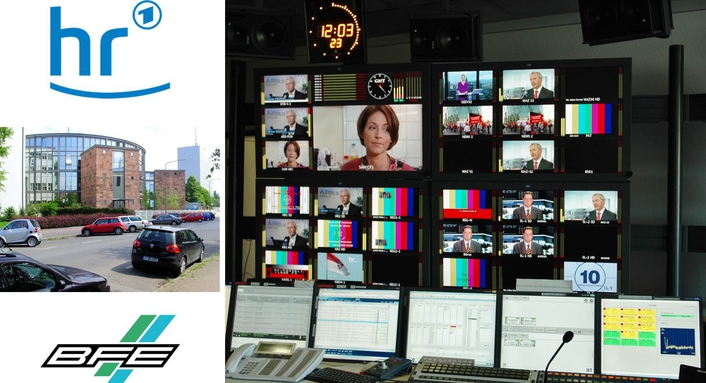 .
Hessischer Rundfunk (Hessian Broadcasting Corporation; hr) with headquarters in Frankfurt has decided to commission BFE Studio und Medien Systeme GmbH with the renewal of the SRF dubbing list that has been written using MS-Access. Thereby, it has to do with a solution that organizes and manages the processes between the areas of the administration office, control room, recording, program exchange, interim tape storage, playout and document/archive. In the process, BFE, as a general contractor, is responsible for the planning and installation all the way to putting KSC Manager product expansion into operation. The installation of a KSC Manager system, version 12 or higher, is a requirement for this expansion.

Seeing that the KSC Manager is a widely distributed product, first of all, the requirements set by Hessischer Rundfunk have to be coordinated with other broadcasting institutions to develop a generally accepted solution. The structure of the KSC Manager expansion, with the name “Organizer”, generally entails the implementation of an ordering system, an ordering process, and an interface to the ARD administration office in Hamburg (LEISYS). An existing KSC Manager is going to be used as an infrastructural basis.

There are numerous benefits associated with such an expansion. On the one hand, it uses existing system components such as data protection and existing redundancy switching. On the other hand, a single application for the areas referred to will reduce the degree of complexity of the system as well as the training requirements of the personnel constituted of an interdisciplinary team. By means of joint data storage, data from the administration office can be directly utilized as control parameters for equipment in the control room. Furthermore, complex resource allocation between various systems can be done without.

One of the most significant characteristics of the Organizer include the implementation of a central ordering administration system for the administration office. Order processing becomes a central source of information for all the areas involved with the dubbing process.

Seeing that registrations for LEISYS can be generated automatically deriving from the KSC Manager, this results in a complete integration with the ARD administration office in Hamburg.

All those involved who do not have direct access to the KSC Manager can communicate orders to the administration office over a browser without any media discontinuity.

About Hessischer Rundfunk (hr)
Located in Frankfurt, hr is a member of the consortium of the Federal Republic of Germany’s public broadcasters (ARD) and is the sixth largest institution in this association. The broadcast station currently employs around 1,600 permanent employees as well as just under 900 freelancers. With 1,200 events in fields of classical music, literature, rock, pop, jazz and sports on a yearly basis, it is the largest cultural organizer in Hesse.