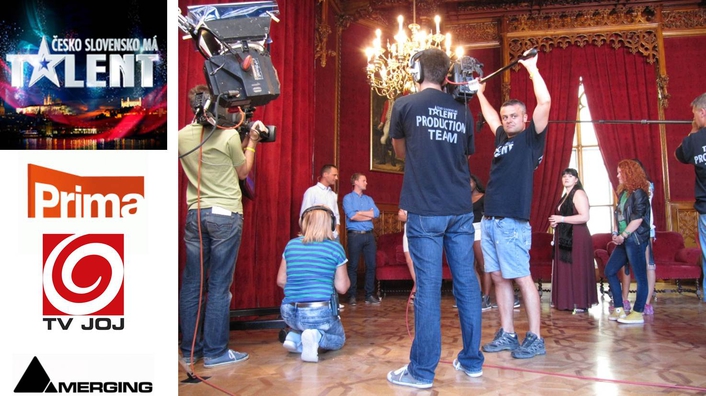 The Czech & Slovakian talent show finds Merging’s Horus/Pyramix the OB solution
A spectacular 19th Century castle might not seem the obvious choice for two editions of the Czech & Slovakia Got Talent show, but every nation that has taken this FeemantleMedia formula, puts its own identity on the venues as well as the performers.

Castle Lednice was the summer palace of the Liechtenstein Royal Family until they fled in 1943 taking everything they could move with them. Now restored to its former glory, the castle and its surroundings have been declared a UNESCO World Heritage Site. Situated near Brno, this was the location for three days of shooting in August for two “Big Bang” editions of the show broadcast in November. Jam Film 1999 look after all the production and it was transmitted by TV Prima in the Czech Republic and TV JOJ in Slovakia.

Recording outside the studio is good for the viewer but presents its own additional challenges for the technical team and the audio recording had been problematic on previous theatre audition shows and director, Jeffo Minařík demanded a better solution. Boris Seitler from G-Tec Professional, Merging Technologies’ Slovakian distributors was confident that the Horus Networked Audio Converter and Pyramix 8.0 would provide a neater and more efficient solution and together with freelance sound engineer, Alex Molcanov, a system was installed to provide maximum flexibility and reliability.

The front of house sound was being supplied by the very experienced Amex Audio company and the main recording mixer was a Soundcraft Vi6.  This was linked to the Horus via MADI with a feed from the MADI input routed directly to the 24 AES/EBU outputs going to a JoeCo BlackBox recorder for back up.  The Horus was then connected to Pyramix using RAVENNA to record 50 channels of audio and deal with the D/A feeds from the Pyramix.

This very neat installation covered all requirements but with no external boxes or complex cabling. In addition, there was a feed from the Horus D/A providing audio for the directors in the Reckord HD OB van and for the Phonak in-ear system for the judges and presenters. As a final piece of security, the presenters microphones and booms were recorded on a Sound Devices 788-T and sent back to Horus.  The back-ups were good insurance but were never needed as Horus and Pyramix performed faultlessly.

“We didn’t know very much about Horus but Boris assured us that this would be a much better solution than what we used before.” commented Alex Molcanov; “He was certainly correct and this was such an easy system to use and handled a lot of channels which was perfect for this type of event.”

So who won: Laserman Alex Dowis, Jumbochicks, silhouette artists Teulis, young drumming sensation Andrej Kampf, Monika and her performing dog Arsi?  No, it was a singing garage mechanic from Zilina in Slovakia called Jozef Palusik who cleaned up nicely for his performance of “My Way”. You can’t beat a great song in any language!