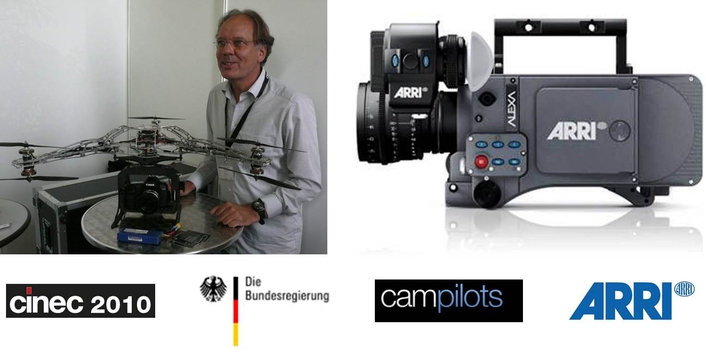 Volker Tittel with his Multikopter and the ARRI Alexa
About three months ago from 18th to 20th September, Holger Fleig and Volker Tittel were in the spotlight when receiving the cinecAward for their project “campilots” during the International Trade Fair for Cine Equipment and Technology cinec. Now they were awarded a prize once again: In Berlin, the “campilots” and Arnold & Richter Cine Technik were given the Innovation Award 2010, a prize awarded by the Federal Government Commissioner for Culture and the Media.

Thanks to the support as a start-up by the organizers of the cinec in cooperation with the Cluster Audiovisual Media Bavaria, the “campilots” could do some international networking in Munich in September. Besides they were given the opportunity to apply for the much sought-after cinecAward – and they even won a prize in the category Camera Support / Grip. For their digital camera ALEXA, ARRI was given a cinecAward in the category Camera Technology.

The fact that two cinecAward-winning companies were now given a prize by the German government shows the innovative capacity of the cinec and its value as one of the most important trade shows of this kind. New developments presented at the fair do not only attract attention regionally, but are also perceived internationally.