Hollyland’s Solidcom M1: the Next Generation in Wireless Intercoms for Teams 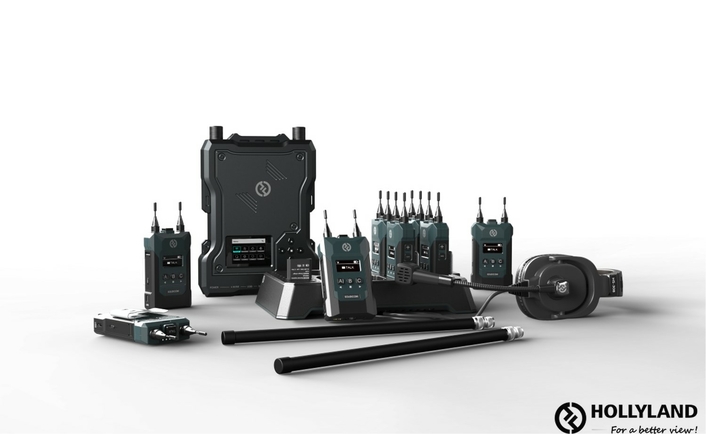 The M1 system is ready-to-go right out of the box and boasts powerful noise cancellation and broadcast-quality audio. With a host of industry-first innovative features, Solidcom M1 is now the go-to wireless communications choice for micro-mid events with a capacity from 100 to 1000 guests, including church events, electronic field production, exhibitions, concerts, etc.

Instant 1300ft wireless intercom system with clear sound
In an industry first, the Solidcom M1 integrates a panel antenna into the base station – providing an instant out-of-the-box communications solution at unobstructed venues, such as church events and concerts. The built-in panel antenna alone supports a range of up to 1300ft (400m) in front of the base station and 160ft (50m) behind. Attaching the two included external FRP antennas provides reliable 360° transmission in a radius of about 985ft (300m) – ideal for large-scale spaces and obstructed venues, including sports events and exhibitions.

The M1 system provides amazingly clear broadcast-level audio no matter how intrusive the background noise is, thanks to Hollyland’s own noise-cancellation algorithms, high 16KHz sampling rate, professional dynamic microphones, and super-wide 200Hz-7KHz frequency response. The included LEMO headsets feature sidetone, reducing user fatigue and greatly improving voice intelligibility. Your whole team will be able to communicate unimpeded, with no confusion about the speaker’s identity or tone of voice, even during a rock concert.

Easy single-tap grouping and versatile cascading
With Solidcom M1, setting up groups for team members such as lighting crew, camera crew, or PAs is intuitive: Simply select the number of each beltpack in the group. Up to three groups can be created and managed in seconds by using the base station, Hollyland app, or private webpage.

The base station can be cascade-connected to multiple sets of audio equipment, including most common legacy intercom systems from other manufacturers, simply by connecting them with a standard network cable or XLR cable. There are four different interface connectors – 2W XLR, 4W RJ45, POE/LAN (Power Over Ethernet) power supply, and cascading interfaces

Each standard Solidcom M1 comes with eight beltpacks, and there is also a package with four beltpacks for micro-sized events. Simultaneous group calls for 16 people in three groups are possible with two cascaded M1 sets. With a standard network cable of 328ft (100m) for cascading, the M1 is perfect for almost any event.

Rugged but intuitive beltpack and headset design
The beltpacks are rugged, yet lightweight and comfortable to hold, with a detachable, replaceable antenna to enhance durability and an HD LCD screen to show status at a glance. The three function buttons on the front of the beltpack are ergonomically designed and of different shapes to prevent misclicking, even in darkness and high-pressure situations.

Dual batteries for continuous 24 hour power
Each beltpack holds two removable Li-ion batteries, which can be charged independently in only 2.5 hours, and each battery provides six hours of runtime, ensuring uninterrupted operation all day long. Likewise, the base station has a dual NP-F battery plate, plus a POE power supply port, guaranteeing a continuous, uninterrupted power supply.