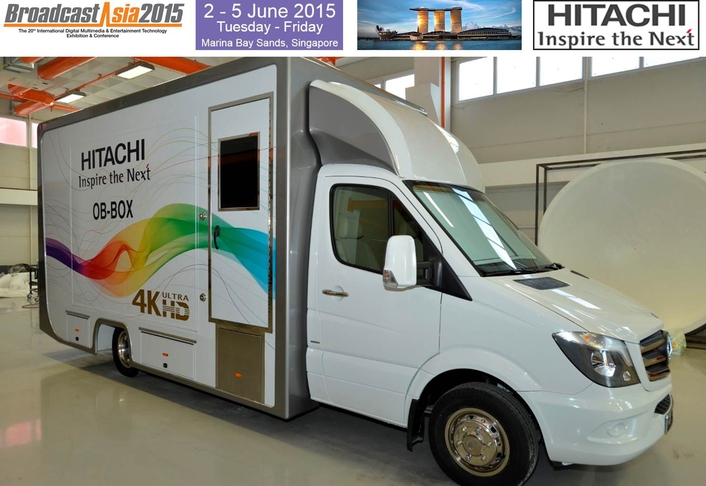 ... together with 4K Ultra-HDTV Cameras
At Broadcast Asia, Hitachi Kokusai Electric Turkey (stand 1B3-07) will showcase the company’s new OB-BOX concept, which it claims offers new levels of outside broadcast (OB) operational flexibility, cost-efficiency and technical performance right up to ultra-HDTV capabilities.

OB-BOX – a new and radically different approach to the OB challenge
Newly developed at Hitachi’s Istanbul-based design and engineering facility, OB-BOX is a fully featured modular OB facility, which is delivered to the customer and then mounted onto a vehicle’s chassis using a proprietary fixing kit. This approach significantly reduces the manufacture and delivery time in any market worldwide since it removes the need to source and ship an appropriate vehicle for each customer.

The OB-BOX comes in three different configurations which support four, eight and 12 production cameras. The option of a booth side extension adds further flexibility to unit sizing.  In addition, an ability to connect two OB-BOX units in a cascade configuration adds more versatility and facilitates many different sizes of OB unit up to 20 camera mobile facilities. 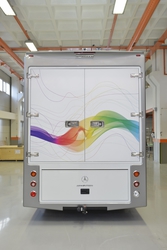 Each OB-BOX is specified, designed and manufactured at Hitachi’s Istanbul facility to meet the customer’s OB needs. The unit provides all of the video, audio, transmission and infrastructure capabilities needed to create a stand-alone outside broadcast facility. The technical specification of the unit is such that it will support any broadcast signal from serial digital to HD and even 4K. Alongside satellite and fiber connectivity, the units integrate powerful Ethernet connectivity, which provides the production team with internet facilities on site. At the same time, OB-BOX features sophisticated Cloud capabilities, which enable the users to send 4K content back to the broadcaster’s production centre quickly and easily.

Building on its extensive OB vehicle design heritage, Hitachi has ensured that operational staff will feel at home whilst working in the OB-BOX. Attention has been paid to the facility’s internal design, monitor and control systems, air conditioning and weather proofing in order to create a comfortable working space irrespective of external environmental conditions.

“At Broadcast Asia, we will demonstrate a range of OB and broadcast system camera technologies which combine to provide market leading technical performance with significant operating efficiency,” commented Koji Yuzawa, General Manager of Hitachi Kokusai Turkey. “From studio productions, right through to sports and other live events, we have developed solutions that combine the highest broadcast quality with real operational cost savings. We look forward to a very busy show.”