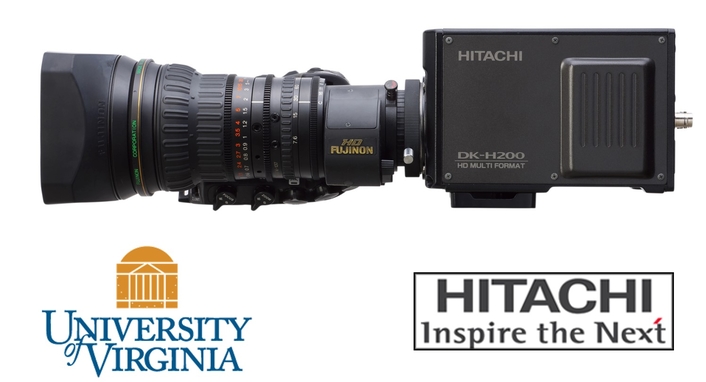 At the University of Virginia, the second-highest ranked public university in the country, the athletics program combines a tradition of academic excellence with an uncompromising drive to succeed. When the department upgraded its live video production workflows to high definition, it chose ten HDTV cameras from Hitachi Kokusai Electric America, Ltd. (Hitachi Kokusai) to provide the outstanding image quality and rich features it sought to meet both immediate and future needs.

The university’s Virginia Cavaliers compete across 25 NCAA Division I sports, and have captured 76 Atlantic Coast Conference championships since 2002 – more than any other ACC school during that time. Until late last year, the athletic department’s live video productions were seen exclusively on large video boards within on-campus venues, engaging and exciting fans under its ’Hoo Vision brand.

“While our post production workflows included some HD elements, our live production capabilities were only SD,” said Matt Uncapher, senior producer and engineer for athletics video services at the University of Virginia. “Anticipating the formation of a new distribution partnership, we had held off fully transitioning to HD until we knew the specific technical requirements of our future outlets.”

When the Atlantic Coast Conference reached an agreement to bring live streams of league matches to multi-screen sports network ESPN3, the time had come for the department to upgrade its production equipment and begin broadcasting in HD. The school’s past success with standard-definition HITACHI offerings led it to consider Hitachi Kokusai again for the HD upgrade.

“We had been very satisfied users of HITACHI Z-4000 cameras for the last seven years,” recounted Uncapher. “We performed comparisons to other vendors’ cameras, but the quality, value and rich features of Hitachi Kokusai’s HD models combined with our positive experience to make our decision clear.”

The university purchased nine HITACHI SK-HD1300 studio/field production cameras and one HITACHI DK-H200 compact box camera in September 2016 and went operational with them in November, starting with live streaming broadcasts of men’s and women’s basketball games. While ESPN3’s specification called for 720p video, the school chose the 1080p-native SK-HD1300 and DK-H200 models in preparation for its future needs. “We knew we would use the cameras for several years and would eventually take advantage of their full 1080p/60 capabilities,” Uncapher explained.

Systems integration firm Comprehensive Technical Group (CTG) performed the entire upgrade project, from installation and commissioning of the cameras to the design and implementation of new control rooms, under very tight time constraints.

“The cameras’ outstanding ease of use and our familiarity with the earlier SD models made the transition simple for our crew of freelance operators and paid interns, with practically no learning curve,” said Uncapher. “Meanwhile, the versatility of the SK‑HD1300s enables us to deploy them in various combinations of handheld operation and hard camera positions on studio kits, letting us tailor each production to the specific sport we are covering.”

Production teams move the cameras between the university’s many indoor and outdoor athletics venues, all of which are linked via fiber to engineering and control rooms located at the school’s basketball facility, John Paul Jones Arena. SMPTE fiber connections from eight of the SK-HD1300s are interfaced to the campus’ single-mode fiber infrastructure using MultiDyne SMPTE-HUT universal camera transceivers, while the ninth SK-HD1300 is deployed wirelessly. The DK-H200 box camera is deployed on a new green-screen studio set, which uses a Ross Video Trackless Studio to create virtual camera moves.

The HITACHI cameras’ integration with the Dashboard open control and monitoring platform from Ross Video has also proven valuable for the university. For productions where the department does not have the budget or resources to send a dedicated shader to the venue, the Dashboard software platform allows a producer in the control room to handle shading remotely through an intuitive graphical interface.

“We have now used the HITACHI HDTV cameras for over 90 events, and they have lived up to our high expectations,” said Uncapher. “Their robust durability has endured heavy usage by numerous operators, and they provide great image quality that is comparable to much more expensive cameras. HITACHI cameras deliver a lot of bang for your buck, and in my opinion would be a great fit for any venue looking for cameras to enhance their productions.”