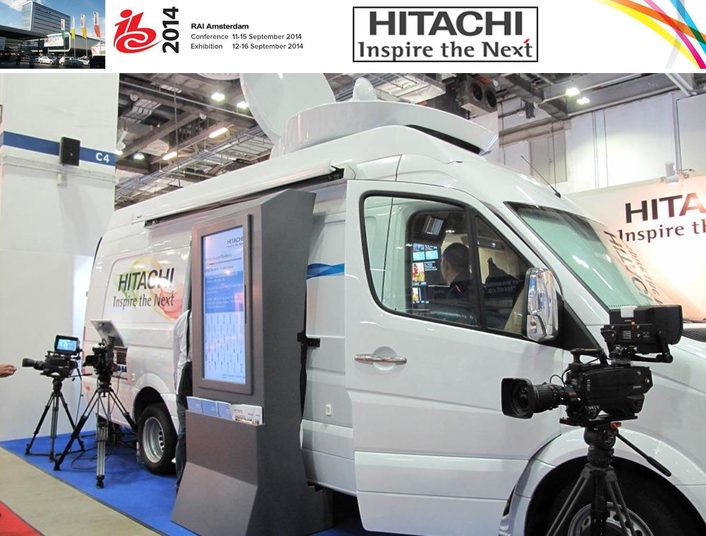 Designed and built at the company’s state-of-the-art engineering facility in Istanbul, Turkey, the vehicle offers a flexible mobile digital production environment complete with advanced digital satellite news gathering (DSNG) capabilities. Starting with standard a Mercedes Sprinter 516 CDI truck, the vehicle goes into HKT’s workshops where it undergoes a transformation into a mobile facility capable of meeting the full live production requirements of a diverse range of sporting, cultural, music and current affairs events.

The compactly designed production facility contains six operator positions and 139 RU of equipment racking. The HD production system supports eight cameras with a 2-ME, 24-input multi-format live switcher and 34x34 3G/HD/SD router. Thanks to the vehicle’s ultra flexible routing and switching environment it is child’s play to interchange the slo-mo, graphics and server positions in order to suit any kind of production. In addition, two 46-inch monitors are equipped with multi-viewer systems so all picture sourcing, monitoring and referencing can be performed on-board the vehicle.

The vehicle’s power requirements are met using a PTO-based engine drive generator, which contributes further to space and weight saving within the vehicle. Hitachi has even gone to the lengths of replacing the vehicle’s sliding doors in order to make more space in its extraordinary interior design. Motorized drums and a sliding mechanism at the back of the vehicle make sure that cable laying and re-wind are simple operations which take the minimum time necessary. 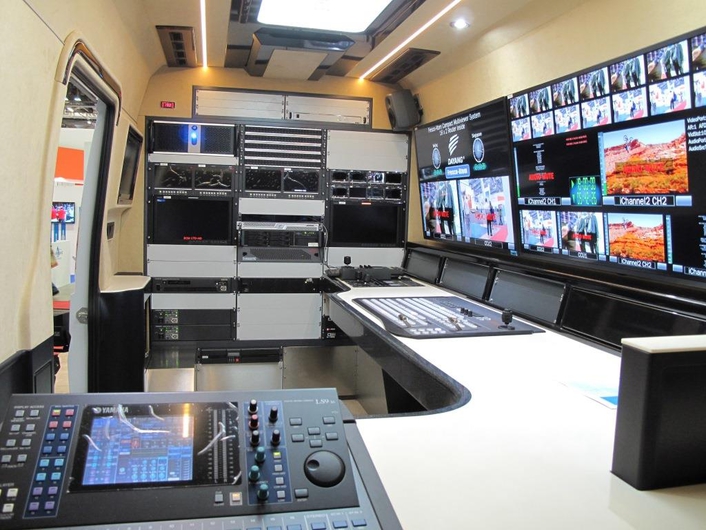 On-board air conditioning system protects kit and crew from harsh environments
A significant feature of HKT’s specialist vehicle design is a 40,000 BTU Webasto air conditioning system, which enables the vehicle to cope easily with the harsh weather conditions experienced frequently throughout the Middle East, Africa and Asia.  Not only is the equipment cooled but the crew is looked after too - each vehicle comes with fridge and coffee makers fitted as standard.

Advanced digital satellite technology raises the bar still further
Another key feature of the HKT mobile production unit is its advanced DSNG capabilities, which are facilitated by the company’s PKM-120 Ku Band Motorized Antenna located on the vehicle’s roof. In addition, a 400W high power amplifier (HPA) is installed within the roof-mounted Antenna Pod in order to avoid extra heat generation in the van. Using HKT`s’ smart operating system, the antenna can be controlled by any smart phone or Wi-Fi tablet.

“The design of this new DSNG vehicle concept is largely based on feedback from customers who need the ability to televise a range of sporting and cultural events but who operate within fixed operational budgets,” commented Cemal Yilmaz, general manager of Hitachi Kokusai Turkey. “The right combination of technologies and products, designed and integrated by our specialist team of design engineers has created a new and radically different concept. Already, we have delivered several of these vehicles to Middle Eastern broadcasters and we believe it will generate considerable interest at IBC and across the EMEA region.”