Hibino MLA technical training — with Chris Pyne (centre)
The mighty Hibino Corporation, the largest enterprise for the entertainment industry in Japan, has made its first investment in Martin Audio’s Multicellular Loudspeaker Array (MLA) system. With its proven technology across challenging venues such as Tokyo Dome and large scale festivals like Rock in Japan, Martin Audio’s MLA is solving problems that other sound systems simply cannot achieve, and this is attracting the attention of promoters demanding MLA as the system of choice.

Making up the Hibino Corporation are four divisions — Hibino Sound, Hibino Pro Audio Sales, Hibino Visual and Hibino Chromatek. The MLA acquisition was authorised by the Sound Division, which has been a market leader in international touring for many years, supporting many of the world’s leading artists with premier loudspeaker systems.

Their investment is for four System 36 rigs, plus an additional four MLA and four MLX subwoofers. This gives them a combined inventory of 92 x MLA, 8 x MLD (Downfill), and 52 x MLX — providing a large capability.

The decision to invest was brought about by the need to provide consistent stadium coverage up to 200 metres depth (such as Tokyo Dome), without the need for delay towers — enabling them to deliver clear sound right to the back of the venue and at the same time solve any noise pollution and sound spill issues. 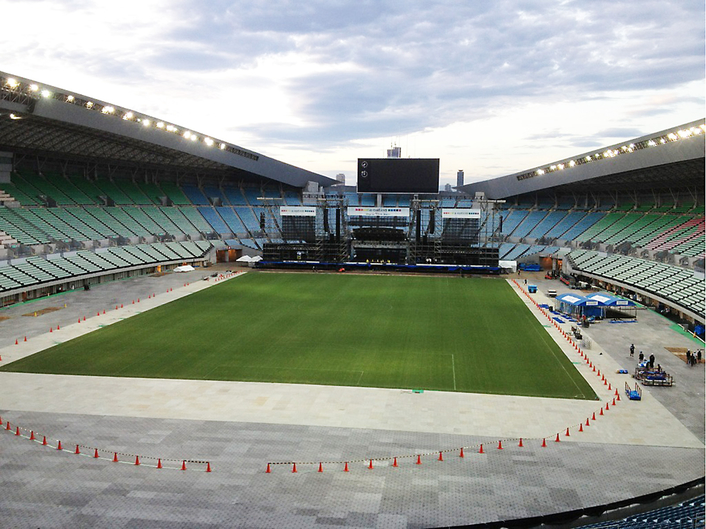 Speaking of this latest development, Ryoichi Hashimoto, Managing Director, Hibino Sound, explained. “We decided on the MLA investment because the promoters of summer outdoor festivals are increasingly demanding the absence of delay towers from festival sites and a need to solve offsite noise issues.”

“We also like the fact that its calculation ability is extremely accurate. The benefit of this is that we can get a result that corresponds with what we have planned in the simulation.”

MLA also benefits from its size and weight ratio, which given regulations in Japan mean that the system provides no obstacles for its deployment.

“In Japan, the weight of the rigging is strictly regulated, but MLA’s weight is similar to systems we have used in the past — even though it is powered. So, it is good for us to be able to plan as we did before.”

Hibino Sound’s new MLA will be pressed straight into festival duty. “This is the most unique loudspeaker system we have ever had,” concluded Mr. Hashimoto. “It will become the new choice for customers since it has the ability to meet all their demands.”

Martin Audio has already completed training for most of Hibino Sound’s system technicians on site, which was carried out by Chris Pyne, Martin Audio’s Technical Support Specialist in APAC.

In summing up, Anthony Taylor, Managing Director for Martin Audio, said, “We are delighted that MLA continues to prove its technical advantage over the competition and more importantly solving sound issues that face the industry. For the number one rental company in Japan to recognise this is a great honour, and we look forward to supporting Hibino in their success moving forward.”