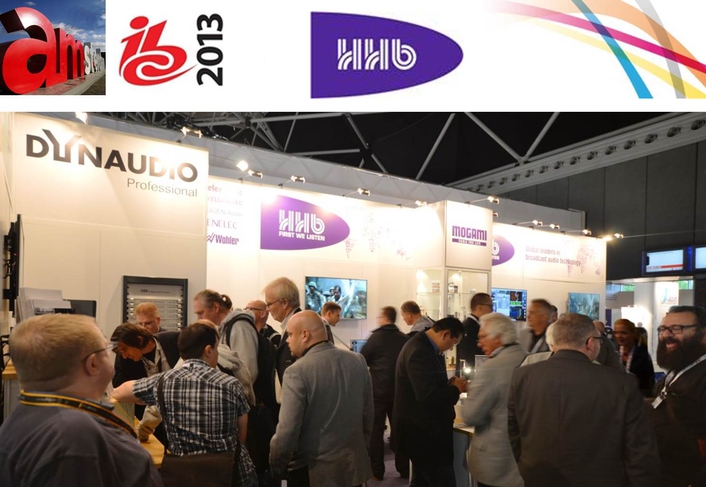 High attendance numbers and exclusive product launches made for an extremely vibrant IBC for HHB
HHB Communications Ltd. is reporting the biggest year yet for broadcast audio at IBC after record-breaking attendance and significant product debuts created heavy footfall on its stand in Hall 8.

IBC has announced that over 52,000 attendees from 150 countries visited this year, making it a second record-breaking year for the show. These high attendance numbers combined with exclusive product launches made it an extremely vibrant event for HHB.

As an Avid Elite reseller, HHB is sharing the news of the new S6 control surface, which combines ICON and System 5 families in a new modular design. The S6 system offers the option of choosing a pre-configured S6 M10 or S6 M40, or with the S6 M40, customise the system even further with different channel control combinations. High precision editing and mixing control allows the user to quickly access and edit plug-ins, surround panning, and more with the multipoint touchscreen and enhanced visual feedback. S6 is also compatible with Logic Pro, Nuendo, and other EUCON-enabled DAWs, enabling users to mix projects on multiple workstations simultaneously. When paired with Pro Tools, S6 provides even more features with enhanced speed and efficiency,

Several leading professional audio manufacturers chose HHB for exclusive product debuts at the show. As such, TC Electronic made the world debut of the new UpCon up-converter for 5.1 HD TV broadcast and the Broadcast 6000 signal processor, while Rosendahl unveiled the new Nanoclocks GL - Digital Audio Genlock Masterclock with HHB. The Mogami LAN cable and new additions to the Yellowtec m!ka range were also made at the show.

The first production model of the Dolby DP580 Reference Decoder with an added HDMI port was on show exclusively on the HHB stand. Roland also chose HHB to exclusively exhibit four new additions to the VC family of video converters and the VR-50HD multi format A/V mixer. This was in addition to the debut of Sennheiser’s new Limit Ear HDM Pro. Compatible with a selection of Sennheiser headphones, the HDM Pro attaches to a set of headphones to protect users from impulse sounds, loud sounds and excessive noise dose to prevent Noise Induced Hearing Loss (NIHL).

Other new products shown with HHB included the updated Nugen Audio LMB loudness batch processor plug-in, now compatible with MXF files, and the Timecode Buddy Mini TRX, which acts as an accurate standalone generator, a transceiver, TC IN and OUT and Genlock out, minus the Wi-Fi functionality of its predecessor. HHB also noted JoeCo’s release of the BlackBox BBR1MP recorder with 24 microphone preamps operating at up to 24bit/96k and showed the new iPad app for the system.

HHB Director of Sales Martin O’Donnell states: “This year’s event showed that the broadcast audio element of IBC is bigger than ever as the show continues to grow. Visitors to HHB’s stand saw a selection of the latest broadcast audio technologies and several exclusive product debuts, and the high volume of traffic on our stand proves that we live up to our reputation as Europe’s leading broadcast audio supplier.”

Founded in 1976 and located in London, HHB Communications is a global leader in the supply of professional audio technology. Serving the broadcast, recording and media production sectors, HHB’s unique expertise is also recognised by major manufacturers and innovators, many of which have appointed the company as exclusive distributors of their products. The specialist division, Scrub, serves the needs of the television and film post production industry from premises in the heart of London’s Soho.