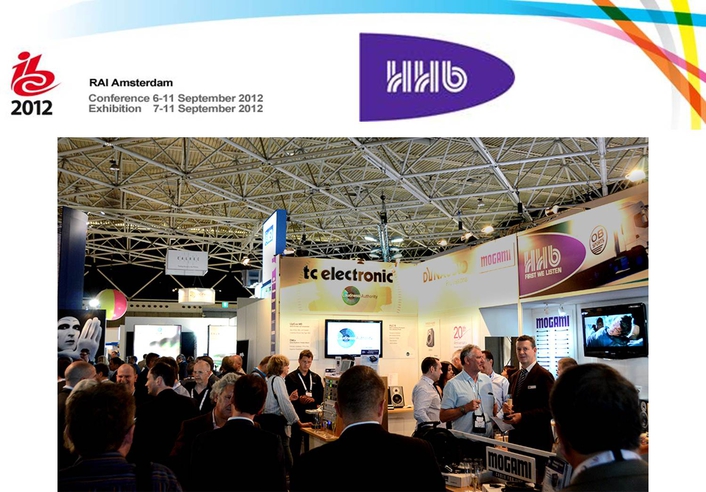 HHB was introducing a host of innovative new products for broadcasters and systems integrators
Professional audio technology specialists HHB Communications is enjoying an eventful and extremely busy IBC 2012 as a result of introducing more new professional broadcast audio products than ever before.

Not only were they located at the entrance of the show’s Audio Hall 8, but it is at the forefront of broadcast audio technology by unveiling a host of new products for broadcasters and systems integrators with co-exhibitors TC Electronic, Dynaudio Professional and Mogami.

And as the show came to an end, there have been several new products debuts made during the show from HHB’s partners, including the Wohler MADIe, the Pro Tools HD Native Thunderbolt interface and new products from Nugen Audio, Minnetonka, Neyrinck, and Soundminer. This is in addition to the announcement of new distribution deals with Yellowtec and DiGiCo, new Mogami Mini Jack cables and powerful updates from TC Electronic and Dynaudio Professional that HHB made on the opening day.

Wohler’s new AMP1-MADIe is an in-rack portable MADI mixer with Ethernet control and configuration. MADIe provides individual volume adjustment, mixing, and audible monitoring of any eight selected MADI channels in a 56 or 64-channel stream. Equipped with an Ethernet connection, it offers a free downloadable software GUI so multiple units can be controlled and configured from a single PC workstation.

HHB Director of Sales Martin O’Donnell comments: “We have had an extremely high volume of traffic at IBC with visitors showing great interest in the new announcements from Yellowtec, TC Electronic, DiGiCo, Dynaudio Professional and Mogami. We have also been very busy introducing visitors to the latest professional audio solutions from our partners who are launching new products at IBC. All five days of the show have been very well attended.”

HHB Communications Ltd.
Founded in 1976 and located in London, HHB Communications is a global leader in the supply of professional audio technology. Serving the broadcast, recording and media production sectors, HHB’s unique expertise is also recognised by major manufacturers and innovators, many of which have appointed the company as exclusive distributors of their products. The specialist division, Scrub, serves the needs of the television and film post production industry from premises in the heart of London’s Soho.