HES Technospot Has the ‘X Factor’ in Hungary 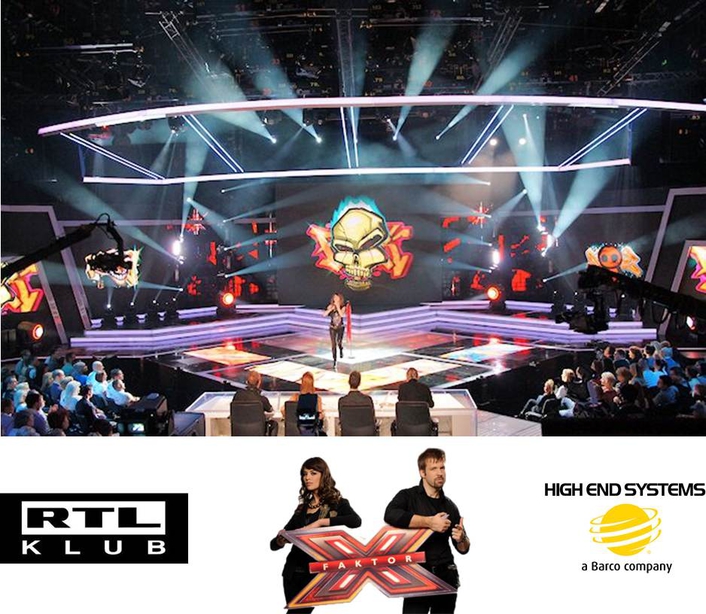 Budapest’s Perfect Design Factory Specs HES Lighting & Control
The X Factor is that thing, the “IT” quality, that distinguishes itself from the rest. High End Systems’ Technospot automated luminaire, is the X Factor in Hungary’s version of the popular TV singing competition. Also shining onstage are six SHOWGUN 2.5s, two intellaspots and 20 Studio Commands. A Wholehog 3 console with DP8000controls the show.

PDF’s LD Peter Paricska chose 24 Technospots as a main lighting fixture because he needed a “fast, accurate and not so noisy” fixture with CMY color mixing capability and a bright beam output. Technospot more than met the tech requirements, he said.

“The Technospot is quite a good fixture. It moves really fast. The CMY color mixing capability works quite fast as well. It is such a bright beam output, that sometimes we have to dim these units for the cameras for special effects - and then we completely adjust its color temperature and light output for the cameras. We try to create positions which make a good look for the audience as well as for the cameras.”

The Technospot is a hard-edge, compact automated luminaire is designed for small and medium scale performance venues. With CMY color mixing, the fixture offers a number of effects including two rotating Lithopattern wheels, plus a rotating prism and animation wheel. It has a large lens opening with a 5.3 inch aperture, allowing a full beam with zoom and more than 12,000 lumens of output.

There are 14 Technospots mounted on columns on either side of the stage at the back by the main video wall, while the other 10 fixtures are on hoists above the stage.

Intellaspots are placed on either side of the set for special aerial effects. “They are usually used when the studio goes for a complete blackout, and we only use these lamps to create some special aerials or one sharp light to the people on the stage for a while.”

Indigo Highlighter is a new feature that provides designers with additional light output from four 1-watt indigo LEDs, thus increasing the layering abilities. The feature now comes standard on all intellaspots shipping from High End Systems, as well as on the new Technospots.

The Indigo Highlighter feature is used sparingly for great effect in the show, PDF's Sandor Szatmari said. In a recent taping, he described how the band - clothed entirely in white from head to foot - was the perfect prop for showing off the Indigo Highlighter using thick, sharp white beams.

Szatmari likes the intellaspot for many reasons, including its “great zoom, adjustable CTO, fast color changes and nice light output.”

The SHOWGUN 2.5s are placed in the set on the back and edge of the stage. PDF specified them in the show’s first season last year as well. “We are always using the LED ring on the fixture and we love it,” Szatmari said. “The beam is the biggest we have ever seen from this kind of fixture. We have custom gobos - a circle, for example, so we can create nice tunnel effects.”

The PDF team has been using Wholehog consoles for years, so they are well versed in the software. They enjoy using the newest software on the Wholehog 3, Szatmari said.

“We like the color coding features - it makes the whole console more user friendly, and we can use it more efficiently. We really like the USB drive support on the Wholehog 3 console, as it makes our life easier than before.”