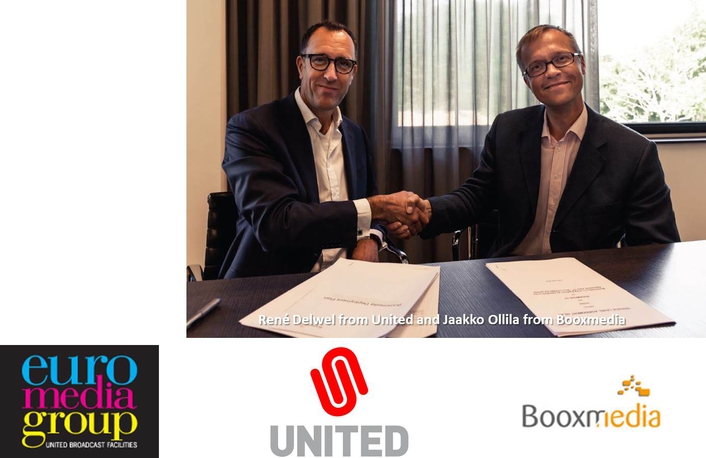 Booxmedia and United, part of the Euro Media Group, Join forces to Launch Pioneering TV Content Solution
What will be the next major innovation relating to how consumers access television? The fact is, with the arrival of VOD and cloud-TV the future has already arrived. Now Booxmedia, and United on behalf of Euro Media Group (EMG), have joined forces to pioneer an exciting new concept destined to revolutionise TV consumption trends.

The companies have collaborated to develop and launch a VOD and cloud-based TV white label content delivery solution aimed at European content owners, corporates and broadcasters. As part of the partnership, United and the other EMG companies will benefit from the opportunity to license select products from Booxmedia’s market leading VOD and TV portfolio.

“Consumers are demanding new ways in which to watch their content on request, at a time to suit and across the range of devices at their disposal, including mobile phones, tablets and Smart TVs” says Jukka Sintonen, CEO Booxmedia. “Booxmedia has developed a ground-breaking, stable technology that enables broadcasters of all sizes to deliver content directly to their audience. Our new business relationship with United and the other EMG companies demonstrates how it is possible to be totally responsive to the changing needs of the viewer and underpins once more, how television has successfully evolved to embrace the cloud,” Sintonen said.

René Delwel, Director United adds “VOD, IP and cloud-based TV content delivery no longer represents a niche sector but has now graduated to become a mainstream requirement in most European markets. Our customers are demanding easy-to-use content consumption solutions exclusively designed to be compatible with an expansive choice of personal screens and devices including smartphones and tablets. We are delighted as United to take on these new services on behalf of the Euro Media Group and do that together with an established innovator such as Booxmedia, to improve and strengthen our VOD, IP and cloud-based TV services offering.”

Over the next four months, Booxmedia, United and the other EMG companies will roll out several joint products and services to the European market. These will include off-the-peg solutions for video on demand, live streaming, catch up TV services and the delivery of ad-based content.

Booxmedia:
Booxmedia is a leading innovator in the cloud-TV technology solutions sector servicing major international media companies and service providers. Booxmedia enables content owners to benefit financially from distributing premium content in an encrypted secure format, suitable for any screen, including tablets, computers, smart phones and smart-TVs.
Founded in 2009, with headquarters in Helsinki, Finland, Booxmedia is expanding internationally and boasts customers in Europe and North America.

Euro Media Group:
As the European industry leader, Euro Media Group is operating from 7 countries: France (Euro Media France, DVS, S-TV), Belgium (Videohouse, Projectbuilders, Motionmakers, Eurolinks), The Netherlands (United, Online Media,  HollandseHanden), Germany (Nobeo), United Kingdom (CTV, ACS), Italy (3ZERO2) and Switzerland (Livetools Technology). The Group provides its clients with a complete custom-made solution for the production and delivery of all Media content from broadcast through to on-line. As a technical integrator, the Group is active across the entire production process, handling every aspect from filming to contentdelivery. The Group owns the largest range of studios and outside broadcasting mobile units in Europe.