Heller Keeps Eclipse in the Air 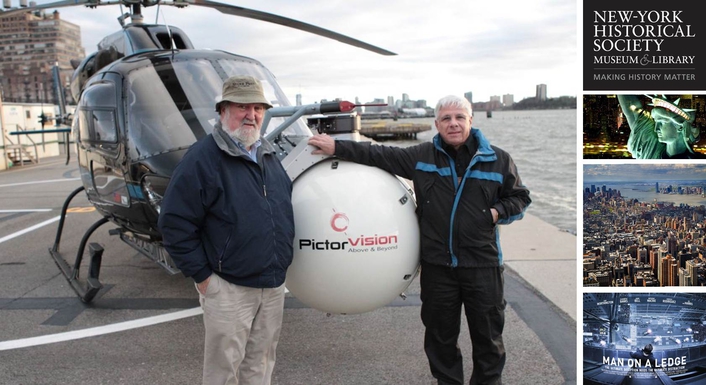 Cinematographer Brian Heller, left and pilot Al Cerullo, right
When a high-end production being shot in New York requires aerial cinematography, chances are they call Brian Heller. And the first place he turns to is Pictorvision for the Eclipse aerial camera stabilization system.

“It’s a no-brainer,” Heller says. “Eclipse gives me the freedom to make shots that no other aerial equipment can get.

“Last year I had a bit of a challenge shooting a major amount of footage for the CGI department on a big feature. They needed steady shots off the ledge of a six-story building in the middle of Manhattan. Shooting in Manhattan is a challenge by itself but to up the anti, we had to deal with gusty wind conditions,” Heller adds. “However, with all this around me, I literally didn’t have to do anything to keep the horizon level. The Eclipse did it perfectly and automatically.”

Because of his intimate knowledge of the challenges of shooting in and around Manhattan’s congested but unique architecture, he’s often called on to capture beauty shots of the city. One job was really fascinating. “It was for the New York Historical Society,” he recalls. “While I’m often shooting beauty shots for various commercials, those shots will usually end up on a television screen – even if it is a big one. The Historical Society shots are going to be seen on an 80-foot screen at the entrance of the Society’s building. I knew I had to get shots with no discernable movement. Not a problem with Eclipse. It always remains stable, even at high speeds of 120 knots. Other systems usually can’t handle over 80 knots.”

Ask Heller what more he likes about Eclipse and he’ll enthusiastically give you a laundry list. “It might sound like a little thing, but the fact that the gyros do not tumble or topple from rapid (sharp turns) helicopter maneuvering is a big deal. It can save a lot of frustration,” he starts. “Then there is the immediate start-up of the optical gyros – a few seconds vs. a few minutes.

“And, the increased payload is really important,” he continues. “I don’t need to worry about the camera/lens package – especially when I need large zooms like the 12 to 1. It can handle all of them.

“For aerial shooters, one of the more difficult helicopter shots is straight down,” he adds. “The pilot cannot see through the floor of the helicopter. With Eclipse, the operator can roll, pan, and tilt through 90 degrees straight down and allow the pilot to concentrate on following the course.”

Heller says there is another big deal about Pictorvision and Eclipse--their techs. “They are fantastic,” he concludes enthusiastically. “The Eclipse wouldn’t be what it is without the outstanding techs that keep it flying!”

Recently Heller worked on major features including “Man on a Ledge”, “The Town” and “A Very Harold and Kumar 3D Christmas”.

The Pictorvision Eclipse was recognized with a Scientific and Engineering Academy Award at the 84th Annual Academy Awards for Technical Achievement.

About Pictorvision
Pictorvision is the first and only company to offer an entire line of Eclipse, Wescam, and Cineflex gyro-stabilized aerial camera systems for capturing thrilling images from above and beyond. Whether the production calls for 3D, HD, 35mm, 4Kdigital, IMAX 35mm, cost-effective SD, or anything in between, Pictorvision’s goal is to provide a tailored solution for each project. Revolutionizing a new generation of aerial camera systems, the Eclipse offers the most advanced steering, stability, and pointing capabilities available on the market. Partnering with the world’s most creative Directors of Photography, our engineering team integrates user functionality with industry-defining technology, to usher in a new dawn of aerial cinematography.