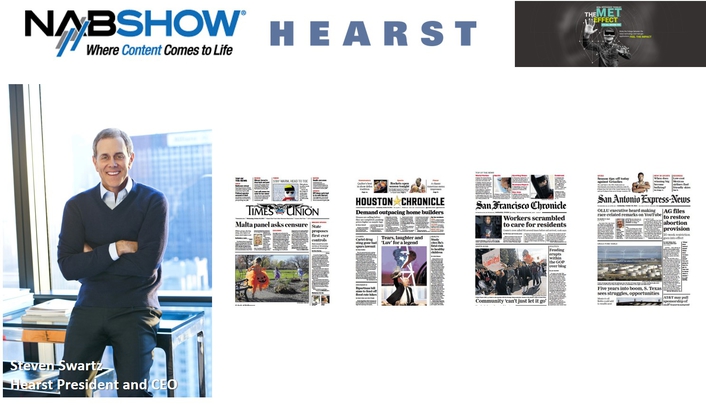 Steven Swartz, president and CEO of Hearst, one of the nation’s largest diversified media, information and services companies, will participate in an executive Q&A during the 2017 NAB Show Opening, Monday, April 24, in Las Vegas. The interview will take place following NAB President and CEO Gordon Smith's "State of the Broadcast Industry" address. The opening event is sponsored by Blackmagic Design.

Swartz became president and CEO of Hearst in 2013 after serving as executive vice president from 2001 to 2008, president of Hearst Newspapers from 2009 to 2011, and as COO from 2011 to 2013.
Hearst's media interests include ownership in 30 television stations such as WCVB in Boston and KCRA in Sacramento, Calif; cable television networks such as A&E, HISTORY, Lifetime and ESPN; newspapers such as the “Houston Chronicle,” “San Francisco Chronicle” and “Albany Times Union;” more than 300 magazines around the world including “Cosmopolitan,” “ELLE,” “Harper’s Bazaar” and “Car & Driver;” and investments in emerging digital and video companies such as Verizon, Hearst Media Partners, Complex, BuzzFeed, VICE and AwesomenessTV.

“Hearst represents the limitless potential surrounding the convergence of media, entertainment and technology,” said NAB President and CEO Gordon Smith. “We look forward to hearing from Mr. Swartz as he shares with NAB Show attendees what it takes to make a diverse media business successful in such fast-paced and innovative times.”

Hearst Television owns and operates local television and radio stations serving 26 media markets across 39 states reaching over 21 million U.S. television households. Through its partnership with nearly all of the major networks, Hearst Television distributes national content over nearly 70 video channels including programming from ABC, NBC, CBS, CW, MY Net, MeTV, This TV, Estrella and more. Hearst Television is recognized as one of the industry's premier companies, and has been honored with numerous awards for distinguished journalism, industry innovation and community service.

Hearst announced last week it has agreed to acquire a majority interest in Litton Entertainment, which produces more than 800 hours of Emmy award-winning scripted and unscripted programming for broadcast networks and station groups each year. Litton Entertainment is a pioneer in educational-and-informational TV production and syndication and is a leading provider to networks in the family entertainment category.

Swartz began his career in 1984 as a reporter with “The Wall Street Journal” after graduating from Harvard. From 1995 to 2000, Swartz was president and chief executive of “SmartMoney,” a magazine venture launched by Hearst and “The Wall Street Journal.” Under his leadership, “SmartMoney” magazine won two National Magazine Awards and was “Advertising Age’s” Magazine of the Year.

About NAB Show
NAB Show, held April 22-27, 2017 in Las Vegas, is the world's largest electronic media show covering the creation, management and delivery of content across all platforms. With more than 103,000 attendees from 166 countries and 1,700+ exhibitors, NAB Show is the ultimate marketplace for digital media and entertainment. From creation to consumption, across multiple platforms and countless nationalities, NAB Show is home to the solutions that transcend traditional broadcasting and embrace content delivery to new screens in new ways.